The Deepening Crisis in Venezuela: President Maduro and Juan Guaido

The political and humanitarian crisis in Venezuela does not see a resolution, and is only continuing to grow. Mr. Juan Guaidó, the leader of the opposition in the National Assembly of Venezuela has declared himself as the legitimate interim constitutional president, a claim denounced by President Nicolas Maduro.

On 23 January 2019, Mr. Juan Guaidó, the leader of the opposition in the National Assembly of Venezuela, declared himself as the legitimate interim constitutional president. This declaration was recognised by the United States, Canada and most nations of South America along with the United Kingdom and other major European nations ‘until credible elections are held.’ While some nations have called for immediate elections, Mr.Guaidó has stressed on deferring it until the end of 2019, so that the interim government could stabilise itself amid the prevailing socio-political and economic conditions of Venezuela. 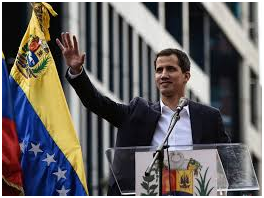 Mr. Juan Guaidó he has become the international face of the opposition parties of Venezuela. He is an industrial  engineer  from  Vargas,  one  of  Venezuela’s  poorest states  and  a lawmaker from the Popular Will party, became the leader of opposition in the parliament, the National Assembly in early January. (While President Maduro stripped the legislative body of its powers in 2017, it still meets and is recognized by most countries.) According to the Venezuelan constitution, the leader of the National Assembly becomes the president whenever there is a “vacuum of power” within the country. Mr. Guaidó claimed that President Maduro won a second term as the president in May 2018 through rigging of the elections. This coupled with the ongoing humanitarian crisis in the country constituted a vacuum as per the constitution.[1]

Apart from the international recognition for Mr. Guaido, there are some signs that support for the opposition is expanding beyond its traditional middle- and upper-class areas. Several protests against the Maduro government have been organised by the citizens in working-class neighbourhoods, which have supported President Hugo Chavez and Maduro in the past. Mr. Guaidó led the protesters on February 2, 2019, as a show of strength to assume power. On February 12, 2019, tens of thousands of demonstrators ones again came out on to the streets to protest against the government and President Maduro. While the opposition has hailed the new momentum, the leaders also recognise that there are few signs that President Maduro will relinquish power. It is argued that as Mr.Guaidó continues to lead the people’s protests and gain international recognition, he would need to address the threat to safety and security of his supporters from "colectivos." The colectivos are organised militia/civilians with military training that are increasingly being used by the Maduro government to intimidate protestors. They are powerful group, informal forces used by the government that control vast territories across Venezuela, and are financed mostly through extortion black-marketing of food and drug trade.[2] 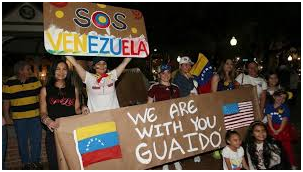 To address the humanitarian crisis arising due to the lack of essential goods and services in the country, Mr. Guaidó called for an international conference for an emergency humanitarian aid. He has announced that he was working on creating an international aid coalition that would be delivered at three points of entry, which are yet to be determined. However, as President Maduro still controls Venezuelan ports of entry through the military, Mr Guaidó has asked the country’s armed forces to allow the entry of the aid and not to cross a "red line" by blocking it. The military has offered its full support to President Maduro, and the opposition and Mr. Guaido recognise that it would be difficult to get the support of the military in the present circumstance as they are also profiting from the crisis. However, there are reports in the media tha  low-ranking officials are divided about their continued support to the Maduro government. In fact, some analyses show that even the high-ranking officials of the military would also support the interim government in the future. This was evident from the support expressed by Venezuela’s top military representative to the United States, Colonel José Luis Silva and by Major General Francisco Yane, two of the highest ranking military official to officially support Mr. Guaidó. 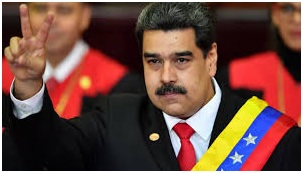 President Nicolas Maduro, who began a new six-year term in January after winning the 2018 elections, publicly denounced Mr. Guaidó’s claim for power and alleged that other nations were acting at the behest of the United States to overthrow the legitimately elected government of Venezuela. The 2018 presidential elections held in Venezuela were boycotted by the opposition. Several nations maintain that the elections were not fair and were rigged. The Venezuelan government has dismissed these claims and President Maduro has refused to step down or hold fresh elections. President Maduro has the support of the military, the state administration and the supreme court of Venezuela. Countries like Bolivia, Cuba, Nicaragua, Mexico, Uruguay Russia and Turkey continue to support Maduro’s presidency. In fact, Mexico and Uruguay have offered to negotiate an end to the crisis between President Maduro and Mr. Guaido, an offer that has been rejected by latter.

India has responded to the crisis by stating, “(India is)...closely following the emerging situation in Venezuela.... (India is) of the view that it is for the people of Venezuela to find political solution to resolve their differences through constructive dialogue and discussion without resorting to violence. ... (India)...believe(s) democracy, peace and security in Venezuela are of paramount importance for the progress and prosperity of the people of Venezuela. India and Venezuela enjoy close and cordial relations”[3] Over the past decade India has increasingly tried to diversify its energy import sources, with Venezuela providing an alternative to West Asian oil. Companies like state-owned ONGC Videsh, Indian Oil Corporation and Oil India have invested in Venezuela’s Carabobo and San Cristobal oil fields. India has also developed refineries to refine the heavy crude from Venezuela. With the United States no longer buying from Venezuela, it is likely that the Latin American nation would be willing to divert its crude oil to India on favourable terms.

As of date, the political and humanitarian crisis in Venezuela does not see a resolution, and is only continuing to grow. In this situation, the mechanism that the interim government would adopt to finance its operations, including running the government and its agencies abroad, remains unclear. Therefore, there is a growing recognition that a dialogue for negotiation needs to be initiated on an urgent basis. This would not only end the crisis in Venezuela, but would expedite the planning for the long-term recovery of the country.

* Dr. Stuti Banerjee, Research Fellow, Indian Council of World Affairs, New Delhi.
Disclaimer: The views expressed are that of the Researcher and not of the Council.

[3] Media Centre, Ministry of External Affairs, Government of India, “Official Spokesperson's response to queries on the situation in Venezuela,” https://mea.gov.in/media-briefings.htm?dtl/30947/Official+Spokespersons+response+to+queries+on+the+situation+in+Venezuela,Accessed on 01 March 2019