The result of the 14th General Election in Malaysia declared in May 2018 was a major surprise. The ruling coalition the United Malays Nationalist Organisation (UMNO) headed by Barisan Nasional (BN) lost for the first time since Malaysia’s independence 61 years ago.  Dr Mahathir Mohamad led to victory the opposition coalition the Pakatan Harapan (PH) which was formed after the 2013 General elections. The PH comprised of the left and left-centred parties that included the People’s Justice Party (PKR), the multi-racial Democratic Action Party (DAP), the progressive Islamic National Trust Party (AMANAH), and the racially exclusive Malaysian United Indigenous Party (PPBM).1

The return of Dr Mahathir as the Prime Minister may have well raised concerns in the West given his rhetoric in the 1980s and 90s along with his authoritarianism style of governance. However, many first generation Malaysians would also recall his strident nationalistic and pragmatic approach to the market system that had brought economic prosperity and growth. By pushing infrastructure development it helped draw foreign investors in large numbers helping Malaysia become one of the world’s top 20 trading nations. This helped Malaysia get integrated with Western economies and achieve an enviable development record in the 1990s.2

As indicated in the bar diagram in Figure One, during Dr Mahathir’s premiership from 1981-2003, Malaysia witnessed substantial growth of its GDP. After the announcement of the ‘Look East Policy’ in 1982, under the Mahathir government there was a push for creating an enabling ecosystem in Malaysia which would encourage foreign investment while switching from a state-spurred to private sector-led growth. This led to a sustained GDP growth of close to 10 percent from 1988 onwards till the Asian financial crisis of 1997. With his return as the Prime Minister after the May 2018 general elections, Mahathir has named revamping the economy and sorting out the country’s finances as his top priorities.4 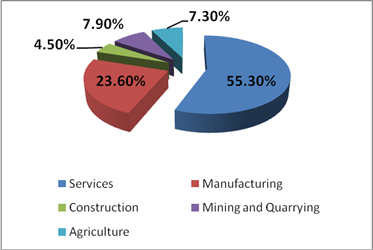 According to the data from the Department of Statistics, Malaysia, the economy in the second quarter (April-June) during the new Mahathir government grew by 4.5 percent. This indicated a slight decline from the 5.4 percent growth witnessed in the first quarter (January-March) of 2018. The pie chart in figure two indicates the sector wise contribution to Malaysia’s total GDP in the second quarter of 2018. The services sector grew by 6.5 percent in Q 2 while manufacturing and construction grew at 4.9 percent and 4.7 percent respectively. There was a decline of -2.2 percent in the mining and quarrying while agriculture also declined by -2.5 percent in the second quarter. The data from the Malaysian statistics department also indicated that in Q2, foreign direct investment dropped from RM 12.0 billion in Q1 to RM 2.8 billion. In terms of its trade Malaysia’s imports in Q2 increased by 7.7% to RM 217.8 billion, with capital goods recording an increase and representing 12.7 percent of total imports in which industrial transport equipment import increased by 9.56 percent. Exports of goods increased by 8.2 percent in the second quarter, valuing at RM 245 billion, with increase in electrical and electronic products followed by refined petroleum products. Malaysia’s major export product namely palm oil and palm-oil based products however witnessed a decline of 12 percent.6

The decline is also on account of the European Union's (EU) move to phase out the use of bio-fuel as transport fuels. The EU in June 2018 agreed to increase renewable energy use by, among other things, cutting out the use of palm oil as biodiesel from 2030. This is part of a renewable energy directive which says 32 per cent of the EU's energy in 2030 must be from renewable sources. Indonesia and Malaysia are world's two largest palm oil producers and exporters. Malaysian Foreign Minister Datuk Saifuddin Abdullah after meeting his Indonesian counterpart, on July 23, stated that both countries will boost cooperation to counter the move undertaken by the European Union. According to Mr Saifuddin, Indonesia and Malaysia supply 80 per cent of palm oil globally, and thus must be united and enhance collaboration against trade barriers. In the second quarter of 2018, as indicated in figure two, construction stood at 4.5 percent, a decline from 4.9 percent in the first quarter of 2018. More specifically, residential and non-residential buildings declined to 7.3 percent and 4.6 percent respectively. The impact of this has been an overall decline in the construction sector. 7

Since taking office, Prime Minister Mahathir has been reviewing infrastructure projects undertaken by the former administration, some of which according to him were unnecessary. The cost-cutting effort has been one of his major agenda aimed at tackling the country's liabilities, which have  surged above RM1 trillion. On May 28 after the Parti Pribumi Bersatu Malaysia supreme council meeting it was confirmed that the 350 km High-Speed Rail (HSR) project which would link Kuala Lumpur with Singapore would be scrapped. According to PM Mahathir, "It's not beneficial; it's going to cost us a huge sum of money. We will make no money at all from the operation. It is just a short track.8  PM Mahathir during his five days official visit to China from August 17 while speaking at a joint press conference with his Chinese counterpart Li Keqiang appealed to China for understanding Malaysia’s fiscal woes. His administration remains critical of the “lopsided” deals with China-backed infrastructure projects.9 On September 10 according to the Finance Ministry, Malaysia has cancelled three China-backed pipeline projects after halting work on them in May following the election of Dr Mahathir. The plans comprised of the Multi-Product Pipeline and the Trans-Sabah Gas Pipeline that cost more than US$1 billion each as well as a pipeline that would have linked the state of Melaka to a refinery and petrochemical plant in the state of Johor. Malaysian Finance Minister Lim Guan Eng in an interview to the Financial Times also stated that another China-backed project - the East Coast Rail Line - was under review.10

Having completed hundred days in office on August 17, the Mahathir government has stuck to its agenda of revamping the economy and sorting out the country’s finances. The new PH government has also abolished the six percent Goods and Services Tax and has been able to stabilise fuel prices through the extension of subsidies. On June 11, during his first foreign trip to Tokyo after taking over the office, in a speech to the Future of Asia forum Dr Mahathir stated that he was "not very keen" on the Trans-Pacific Partnership (TPP) agreement. He stated that the TPP needs to be renegotiated and urged protection for small countries in international trade.11 Thus, while advocating for the continuity of free trade Dr Mahathir continues to stress on the need for it to remain fair to all parties. According to a recent nationwide survey carried out by pollster Merdeka Centre for Opinion Research, 67 per cent of Malaysians approve of the new government.12 Dr Mahathir effort towards restoring Malaysia’s economy and attempt towards fiscal stability seems to be getting domestic approval. There seems to be continuity in his doctrine, based on his ‘Wawasan 2020’ (vision 2020) for Malaysia. This also includes remaining hawkish against any attempt towards the establishment of new era colonialism by any other nation.

The new Pakatan Harapan government prioritising on the restoration of the economy and improving the country’s fiscal health provides opportunity for India-Malaysia economic partnership. This was clearly emphasised during the meeting between Prime Minister Modi and Dr Mahathir on May 31, where both leaders had a productive discussion on further cementing India-Malaysia ties through boosting their economic and other areas of strategic partnership.13 Malaysia is India’s third largest trading partner amongst the ASEAN states, while India is Malaysia’s tenth largest trading partner, with total bilateral trade standing at US $ 14.7 billion in 2017.14 The signing of the India-Malaysia Comprehensive Economic Cooperation Agreement (CECA) in 2010, covering trade in goods, services, investments, and movement of natural persons creates an enabling environment for deepening economic partnership. Further, the priority on improving the country’s financial position being undertaken by the new PH government also provides opportunities to broaden the scope of the bilateral economic partnership.

8Rashninjeet S. Bedi and Hemanantnani  Sivanabdam,  “Dr M confirms high-speed rail project with Singapore to be scrapped”, The Star Online, May 28, 2018, https://www.thestar.com.my/news/nation/2018/05/28/dr-m-confirms-scrapping-of-high-speed-rail-project-with-singapore/, accessed on May 29, 2018.