As the American and NATO troops prepare to withdraw its forces from Afghanistan, the Taliban is ascendant across the country.Recent reports[i] suggest that, ever since President Biden announced that all the US troops will be pulled out of Afghanistan by the twentieth anniversary of 9/11, the Taliban have captured 69 of the 407 districts in Afghanistan.Reportedly, the insurgent group now holds over 142 districts, and is fighting to control about 170 more.[ii] The government has disputed these figures. Although there is no concrete way to verify these numbers, as many areas have been changing hands back and forth between the two fighting sides, it is evident the areas under the control of the Taliban across Afghanistan have increased significantly over the past couple of months.

One of the significant aspects of Taliban ascendency in Afghanistan, this time around is the gaining of territories in the northern provinces, which were traditionally seen as a stronghold of Afghanistan’s ethnic minority groups and were considered to be off-limits for the predominantly Pashtun Taliban, whose stronghold was in Southern and Eastern Afghanistan. It seems the Taliban are first going after those territories where potential resistance could form against them. In June, the Taliban made a significant gain when they seized Afghanistan’s main border crossing with Tajikistan- Shir Khan Bandar and then captured the town and all the border check posts with Tajikistan in northern Afghanistan.[iii]In the north itself, the Taliban has taken control of over 40 districts since May 2021 (see map below), including an important district in Kunduz province, which allows them to encircle the provincial capital.[iv]About 5000 families were forced to flee their homes due to the fighting between the government and the Taliban.[v]Another major battleground between the Afghan security forces and the Taliban since May has been the northern province of Baghlan,[vi] where the Taliban fighters were using the houses of the residents of Pul-e-Kumri city to fight with the Afghan forces. As indicated in the map below, the recent wave of fighting in the north has escalated concerns about other border areas. Hundreds of troops have been deployed to protect the Hairatan border in the Balkh province to protect the border town between Uzbekistan and Afghanistan from all sides.[vii]

Mapping the Taliban Advance up to June 2021 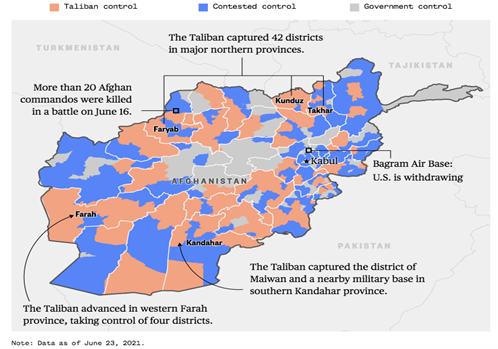 In central Afghanistan, a key highway of the Ghazni province linking the capital Kabul and the southern province of Kandahar was attacked on June 29. The Taliban have had a significant presence in Ghazni province for years, but the recent clashes intensified near the security checkpoints in the ShaikhAjal and Ganj areas of  Ghanzi city.[ix]Heavy fighting has been reported in Kandahar, Baghlan, Takhar and Kunduz, and thousands of families have fled their homes from these areas. It is important to note that roads in many of the areas where flighting have taken place remain closed and telecommunications have been interrupted making it hard to assess the situation at the battleground. According to media reports,the Taliban are advancing in rural areas and near Kabul. They now hold almost twice as much of Afghanistan as they did just two months ago, raising fresh doubts about whether or for how long the Afghan government can survive once US forces depart in two months.[x]

In light of the Taliban’s rapid territorial gains, the Afghan government initiated the “National Mobilization” campaign whereby it would provide the civilian volunteers with arms to resist the Taliban attackers – an initiative that some analysts worry will resurrect local militias that Kabul may eventually find difficult to control. Meanwhile, Commander of the US led Mission in Afghanistan, Austin Miller reflecting on the deteriorating security situation in Afghanistan expressed his worries about the rapid loss of territories to Afghanistan. He also cautioned that the militias deployed to aid the security forces might further push the country into a civil war.

A recent report[xi] produced by the Atlantic Council talked about “Resistance 2.0” or “Second National Resistance” in Afghanistan. The report indicates that in the wake of the US military’s departure, Afghans are already mobilizing and re-arming themselves, preparing in case peace talks fail and the Taliban pursue victory through a military strategy- “ Strongmen are re-emerging and the militia-making industry is back in business with full force.”[xii] In the 1990s, anti-Taliban figures with the help of regional proxies could put up a national resistance against the Taliban in northern, central and western Afghanistan, many of these erstwhile Mujahideen leaders later became part of the political order post-9/11. They now feel that again the time has come to take up arms and unite against the Taliban. Al Jazeera recently reported, Mohammad Ismail Khan, widely known as the Lion of Herat, urged civilians to join the fight. He said hundreds of armed civilians from Ghor, Badghis, Nimroz, Farah, Helmand and Kandahar provinces had come to his house and were ready to fill the security void created by foreign force withdrawal.[xiii] It is noteworthy that, these mobilisations are taking place outside the structures of Afghan National Defense and Security Forces (ANDSF), which has challenges of its own.

Amidst the deteriorating security situation in Afghanistan, Afghan President Ashraf Ghani and the Chairman of its High Council for National Reconciliation, Abdullah Abdullah met President Biden at the White House last month. President Biden assured the Afghan leaders that although US troops are leaving from Afghanistan, “The partnership between Afghanistan and the US is not ending.”[xiv]Roughly 650 US troops are expected to remain in Afghanistan to provide security for diplomats and a few hundred more till September at the Kabul airport until a more formal Turkey-led security operation is in place.[xv]The Afghan leaders also met with House of Representatives Speaker Nancy Pelosi, Secretary of Defense Lloyd Austin and officials of the Central Investigation Agency (CIA) to discuss the critical issues of hand-off from US forces and future contingency plans. On the ground, however, no coordination between the two sides was visible. On July 2, when the US military left the crucial Baghram airbase without coordination with local authorities; dozens of local looters stormed through the unprotected gates before Afghan forces regained control.[xvi]

Some months ago, the Biden administration had come to the conclusion that the Taliban were willing for talks and that is when Antony Bliken’s letter came to the forefront, which provided a 3-step pathway for peace in Afghanistan, namely (1) negotiations for an interim government (2) a ceasefire and (3) coming together of Kabul and the Taliban to discuss the future political system of Afghanistan. However, after the US announced its decision to leave Afghanistan without any condition, the Taliban has showed reluctance to adhere to this plan. Former Indian Envoy to Afghanistan, Vivek Katju sees two reasons behind the Taliban stance, “first, they think that they have won the war, and secondly, it is possible that the Pakistanis are advising the Taliban to gain as much as a military advantage as they can and they at some stage start a negotiating process and show willingness for a unity government.”[xvii]So far President Ghani has not shown much interest in co-governing with the Taliban and proposed election to be the way for the transfer of power, knowing very well that elections under the current conditions are highly impossible. The resurgent Taliban on the other hand has been equally reluctant to share power with a weak Afghan government, one of the reasons why the Doha process could not make any progress.

According to some media reports,  some US intelligence reports  project that the Kabul government could collapse within six months after the US withdrawal.[xviii] While some might argue that the CIA’s predictions about the longevity of Dr. Najibullah’s government was similarly incorrect and therefore this government also will show greater resilance than it is being credited for. It is certainly difficult to forecast the future trajectory of Afghanistan, but the situation does look extremely grim. One can expect heightened levels of instability, violence and population displacement in the near future and there is likely to be a renegotiation of social and political hierarchies withinAfghanistan inthe days to come. President Ghani during his speech in Washington made a reference to the dawn of the US Civil War and said his country faces an “1861 moment”, General Austin Miller has warned, if Afghanistan continues on the trajectory it is on, civil war is certainly a path and that should be a concern for the world at large but more so for Afghanistan’s neighbours.

[i] Dan De Luce, MushtaqYusufzai and SaphonaSmith,”Even the Taliban are surprised at how fast they are advancing in Afghanistan”.NBC News, June 24 2021. Available at: https://www.nbcnews.com/politics/national-security/even-taliban-are-surprised-how-fast-they-re-advancing-afghanistan-n1272236 (Accessed on July 1, 2021)

[x],”Even the Taliban are surprised at how fast they are advancing in Afghanistan”, Op.cit. (Accessed on July 1, 2021)

[xi] Tamim Asey” Resistance 2.0- A military framework to deter a Taliban military takeover and engage the United States and the region on counter-terrorism and peace for Afghanistan”.The Atlantic Council, June 10, 2021.Availavle at: https://www.atlanticcouncil.org/blogs/southasiasource/resistance-2-0-a-military-framework/

[xv] “Roughly 650 US troops are expected to remain in Afghanistanafterwithdrawal”. The Times of India, June 25, 2021. Available at:https://timesofindia.indiatimes.com/world/us/us-to-keep-about-650-troops-in-afghanistan-after-withdrawal/articleshow/83843350.cms (Accessed on July 3, 2021)