Signing of the UN Charter, 26 June 1945' by Amb. Asoke Mukerji, Former Permanent Representative of India to the United Nations

Image 1: Signature Page of the Declaration by United Nations issued by 26 Allied Nations, January 1942 (India represented by Sir G.S. Bajpai's signature at the bottom of the second column)

From Asia, only the Republic of China and India were among the original 26 signatories of the Declaration by United Nations issued by the Conference that launched the process to create the UN and its supporting institutions like the IMF and World Bank in 1942-45. 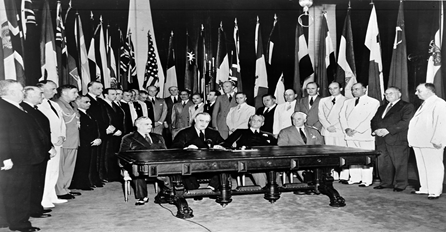 The Indian delegation negotiating at Bretton Woods with other participants at the United Nations Financial and Monetary Conference between 1-22 July 1944 included the first Indian to be appointed Governor of the Reserve Bank of India, Sir C.D. Deshmukh, the person who would become the first Finance Minister of independent India, Sir Shanmukham Chetty, and A.D. Shroff from the private sector who was one of the authors of the “Bombay Plan”. The delegation successfully negotiated India’s presence in the Executive Board of the IMF and World Bank, with the sixth largest allocation of Special Drawing Rights (SDRs) after the United States, United Kingdom, Soviet Union, China and France.

The treaty (UN Charter) creating the United Nations was signed for British India by Sir Arcot Ramaswami Mudaliar (who had been active in Indian politics as a member of the Justice Party, and subsequently became the first elected President of the UN Economic and Social Council/ECOSOC in 1946-47) and for India's Princely States by Sir V. T. Krishnamachari (who had been Dewan of Baroda from 1927-44, and subsequently became Prime Minister of Jaipur State from 1946-49, representing the Princely State as one of the two Vice Presidents of India's Constituent Assembly).

Image 3: Sir A. Ramaswami Mudaliar Signing the UN Charter as Leader of the Indian Delegation, 26 June 1945 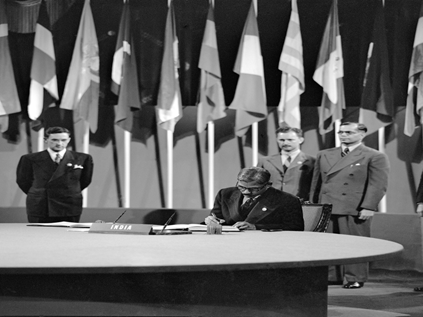 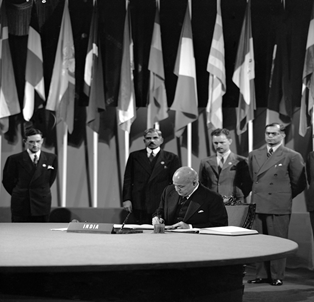 During the negotiations leading to the UN Charter, the Indian delegation is credited for having proposed three ideas that became part of the treaty's provision - the promotion of human rights as one of the objectives of the UN (Article 1.3), penalizing member states that failed to pay their assessed contributions (Article 19) and criteria for election of non-permanent member-states to the UN Security Council (Article 23).

Making India’s statement at the First Session of the UN General Assembly on 18 January 1946, Sir Ramaswami Mudaliar had said India had (with several other countries) opposed the provision of the veto power of the five self-selected permanent members of the UN Security Council. However, the clear commitment in the Charter itself was that “at the end of the ten years' period when we re‐examine the Charter, there will be unanimity again, and that this United Nations Charter will not require all the safeguards which big nations sometimes claim and small nations so unwillingly give.”

This review provision contained in Article 109 of the Charter was never implemented, leading to the ineffectiveness of the UN Security Council today. India’s call for “reformed multilateralism” addresses this issue squarely.

Many ask what makes the membership of the UN relevant for India? It was Vijayalakshmi Pandit, leading the Indian delegation at the Second UN General Assembly Session, who pointed to the core interest of India on 17 September 1947, a month after India's independence from British colonial rule. She said "We cannot eat an ideology; we cannot brandish an ideology and feel that we are clothed and housed. Food, clothing, shelter, education, medical services‐these are the things we need. We know that we can only obtain them by our joint efforts as a people, and with the help and cooperation of those who are in more fortunate circumstances than ourselves."

This has been vindicated with the global development agenda focused on the Sustainable Development Goals becoming the UN's main agenda today.