Taiwan-Somaliland Relationship and the Geopolitical Competition in the Red Sea

In the first week of July, two self-governing territories, Taiwan (Republic of China) and Somaliland, a breakaway region of Somalia, announced that they have established an official relationship with each other.[1] While announcing the news, Somaliland’s foreign ministry tweeted, ‘The Government of Somaliland identified issues of mutual concern, including building bridges of diplomacy; opening missions to boost political and socioeconomic links between the Republic of Somaliland and the Republic of China [Taiwan]’.[2] Taiwanese President Tsai Ing-Wen also welcomed the announcement of the diplomatic relations and hoped to ‘expand mutually beneficial cooperation’.[3] The United States (US), which is a principal benefactor of Taiwan, has welcomed this new development which had taken place ‘in a time of such tremendous need’ and added that Taiwan ‘is a great partner in health, education, technical assistance, and more’.[4] The news is significant for both self-governing territories as they have been attempting to get wider diplomatic recognition for years. For Somaliland, the relationship with Taiwan will be helpful in expanding its overall international outreach whereas, for Taiwan, it is a much-needed diplomatic success since 2016 as many countries had switched from Taiwan to China in the last four years.[5] This latest development is significant for regional geopolitics as it adds another layer to the already intense rivalries in the Horn of Africa.

Although developmental challenges and diplomatic trajectories of Somaliland and Taiwan are different, they share many similarities. Firstly, we will look at differences and then we will move to the similarities. Taiwan is an advanced, industrial society with a high per capita GDP (about $ 25,000) and was once considered an Asian tiger economy.[6] On the other hand, Somaliland is a poor country with per capita GDP at only about $347, which is fourth lowest in the world.[7] Therefore, there is a scope for building a mutually beneficial developmental partnership between these two self-governing territories. In terms of diplomatic trajectory, Taiwan once sat at the global high table of the United Nations Security Council (UNSC) with veto power, whereas Somaliland has to carve out its own identity from the near-anarchic situation of Somalia in the late 1980s.[8] Taiwan was established as the Republic of China (RoC) in 1949 and occupied the Chinese seat at the UN until 1971.[9] As the United States (US) and the UN decided to recognise the People’s Republic of China (PRC), Taiwan has progressively found itself with fewer friends and has been competing for wider diplomatic recognition with PRC since then. In the case of Somaliland, the tipping point came in 1991 when it decided to break away from Somalia and announced itself as an independent state.[10] Since then, Somaliland has been trying to establish itself as an independent state in the Horn of Africa.[11] Although no foreign government has openly supported Somaliland’s claims for independence, they do acknowledge the presence of the breakaway region as an entity separate from Somalia.[12]

These two territories also share similarities. The Taiwanese President Tsai had also referred to the ‘shared values’ between these two self-governing territories when the diplomatic relationship was established. Apart from their status as self-governing territories and fight for international recognition, Taiwan and Somaliland are functioning democracies.[13] Both are surviving in the shadow of larger, ‘mother’ states who do not accept their political independence.[14] Both territories are located in geostrategically important regions and hence are crucial for external powers striving for influence.[15] Taiwan is located off the coast of Chinese mainland and is crucial for the US military strategy in the Asia-Pacific region.[16] Somaliland is a southern neighbour of Djibouti, as well as Ethiopia and, is located near the straits of Bab-el-Mandeb which is important for global shipping and energy supplies.[17] Such a critical geopolitical location allows these two territories to find willing external partners for support. In the last few years, China has acquired a firm foothold in the Horn of Africa (such as establishing a military base in Djibouti and large investments in Ethiopia) and yet Somaliland’s choice of Taiwan over China is significant.[18] It has come as a rare success for Taiwanese diplomacy in the game of diplomatic recognition that is being played out with China.

Taiwan and China have been competing with each other for diplomatic recognition since the 1950s. However, as the PRC was recognised by the UN and assumed the seat at the UNSC, Taiwan began to lose diplomatic recognition. In the post-Cold War era, as PRC’s diplomatic and economic clout grew exponentially, Taiwanese diplomacy was further squeezed to find ways to maintain and hold its diplomatic partners. Globally, as of now, Taiwan is recognised by 15 states and these are mostly the smaller states of the Caribbean, Africa and the South Pacific.[19] Many others have switched their preferences from Taiwan to China. Regional geopolitics, domestic political trends and economic incentives drive the preferences of states between China and Taiwan. For example, Burkina Faso is one of the few states to have switched its preferences back and forth. In the latest switch, it recognised PRC as it needed Chinese assistance in its fight against insurgents in the Sahel region. Pressure from other Sahel states also worked in favour of China.[20] Other such examples in Africa include the West African states of The Gambia and Liberia. As of now, the only African state that recognises Taiwan is the tiny landlocked state of Eswatini (formerly known as Swaziland).[21] All others have recognised China and court the Chinese government for greater investment and assistance.

Somalia recognises China and hosts the Chinese embassy in Mogadishu. In the 1980s, as Somalia descended into instability, the embassy was closed in 1991. But as Somalia began to show signs of stability, China reopened its embassy in 2014.[22] Somalia is also a participant in the Belt and Road Initiative (BRI). Interestingly, prior to the civil war of the 1980s, Somalia was the first East African state to recognise PRC and had lobbied for PRC to gain China’s seat at the UNSC. Since 2014, the bilateral relationship has grown rapidly. In 2019, China-Somalia trade stood at $450 million, up from $150 million in 2012-2013 and China remained an active participant in the international anti-piracy efforts conducted off the coast of Somalia.[23] In the last few years, China has intensified its engagement with Africa and is actively working to expand its economic, military and diplomatic reach in the Western Indian Ocean (WIO)[24]. Somalia’s geostrategic location would be valuable for China’s strategy in the WIO.

Therefore, as China-Somalia ties deepen, Somaliland and Taiwan have found reasons to strengthen their relationship, partly as a response to the China-Somalia relationship and partly, to build ties with as many willing partners as possible. Establishment of relations between Somaliland and Taiwan would work positively for both these self-governing territories. Taiwan has been rapidly losing diplomatic recognition since 2016 (for example, Taiwan has lost Burkina Faso, Kiribati, Solomon Islands) and this development in the Horn of Africa is likely to give a boost to Taiwanese diplomacy.[25] For Somaliland, Taiwan’s experience in navigating international politics would be useful. [26] Moreover, it is likely to open doors for further international assistance, economic investments and leveraging its geopolitical location. In the last few years, Red Sea rivalries have intensified and Somaliland’s coastline has gained immense strategic importance. Therefore, as Somaliland diversifies its international partners, its ability to play the geopolitical game in the region is likely to go up.

The Red Sea coastline had been the focal point of colonial competition in the late 19th century between Britain, France and Italy. Each of these powers had acquired enclaves on its coast and competed to control the wider region. The competition between Italy and Britain was particularly intense, whereas France was content with its control over Djibouti.[27] In the 21st century, the Red Sea has become a centrepiece of competition between Middle Eastern States. Qatar and Turkey have been competing with Saudi Arabia, Egypt and the United Arab Emirates (UAE). Each of these states has been courting regional states such as Sudan, Eritrea and Djibouti for strategic access and military facilities for defending their expansive interests (for example, in Yemen for Saudi Arabia and UAE), project power and expands their area of influence.[28] Moreover, external powers like the US, France, China and Russia too have considerable interest in obtaining a foothold. In fact, the US, France and China already maintain major military bases in Djibouti, whereas Russia has been in talks with Sudan for gaining basing rights on the Red Sea coast.[29] In this context of escalating competition, the geopolitical location of Somaliland near the Red Sea assumes particular importance. 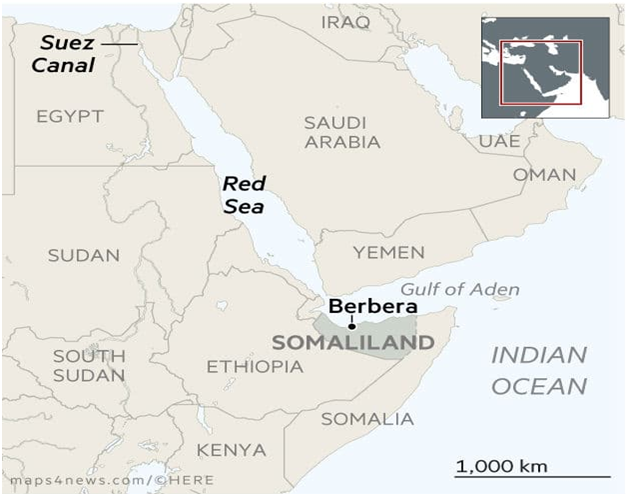 Turkey has been supporting Somalia’s federal government and has emerged as the main patron for the Somali regime. Turkish military trains Somali military units and some Turkish companies run the international airport and seaport in Somalia’s capital, Mogadishu. These are Turkey’s largest overseas investments and Turkey is opposed to the independence of Somaliland.[30] In Somaliland, UAE has taken an active interest. Its state-backed company DP World has been developing the port of Berbera and the UAE has also been building a military base near Berbera and a slew of other infrastructure projects such as highway, cargo airports etc. Ignoring Somalia’s protests, the UAE has also provided security guarantees to Somaliland. Turkey and UAE defend their presence on the Somali coast by pointing fingers towards each other.[31] Completion of the port of Berbera would be useful for a land-locked Ethiopia which has been diversifying its access points to sea away from Djibouti.[32] In this context, Taiwan’s entry in Somaliland will have implications for regional geopolitics. Although Taiwan has no direct interests in Red Sea rivalries, its presence and outreach to Somaliland can be leveraged by other powers, which have an adversarial relationship with Beijing, in limiting China’s growing influence in the region. Besides, just like other smaller states in the region, Djibouti and Eritrea, due to its location and diversification of international partners, Somaliland would attain greater agency in the regional politics. It may perhaps even consider hosting military facilities of other major powers as well. How Somaliland leverages its geopolitical position and new international attraction would have implications for the Horn of Africa.

To sum up, it can be noted that the Somaliland-Taiwan relationship is an interesting development in the context of the fluid geopolitics of the Red Sea and the Horn of Africa region. Its implications in the regional geopolitics will be worth watching.

*Dr. Sankalp Gurjar is a Research Fellow at Indian Council of World Affairs.
Disclaimer: The views expressed are personal