Modi 2.0 and a New Term for Scott Morrison: What it Means for India-Australia Relations?

In lot of ways there will be more of continuity than change in the bilateral relationship. There are various prospective areas of positive cooperation to be explored.

With a new term for the Modi government in India and Morrison administration in Australia, it is important to analyse what it means for the India-Australia relations in years to come. 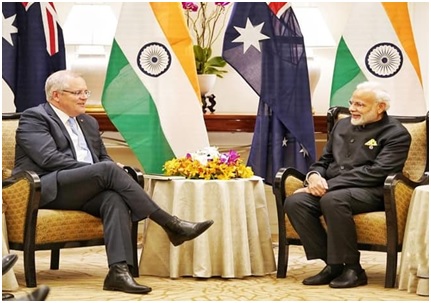 In the strategic and political spheres, it is important to note that the two countries have reiterated their complementary vision for the Indo-Pacific on various occasions. With rapid changes in geopolitical environment the region is characterised by uncertainty and ambiguity. Recently speaking at the Shangri-La Dialogue 2019, Australian Defence Minister Linda Reynolds said that “the Indo-Pacific region is vital to Australia’s security….the region is becoming more prosperous but it is also becoming more contested”.[1] India and Australia by virtue of their geographical proximity of a common Ocean, growing trade and closer security cooperation, figure prominently in the geopolitical setting of the Indo-Pacific region.

India’s vision for the Indo-Pacific which is “home to a vast array of global opportunities and challenges”,[2] emphasises a “free, open and inclusive Indo-pacific”. India’s reinvigorated ‘Act East’ policy focused on its extended eastern neighbourhood, has brought Australia into India’s ambit of interest in a more focused way highlighting Australia’s significance as an important strategic partner. On the other hand, as Australia looks forward to adopting the Indo-Pacific world view, it has stressed on relations with its western neighborhood especially India. Australia was the first country to officially use the term Indo-Pacific in its Defence White Paper 2013 and has stressed on the need for ‘an open, inclusive and rules-based region’. Australia is also an important link in the ‘Quad’ consultations along with India, United States (US), and Japan.

In the past notwithstanding positive developments in the bilateral relationship there was some political ambivalence on both sides, particularly when it came to playing an active role to build a stable regional order in the broader Indo-Pacific region. Security cooperation between the two has been slow to develop. This is in part because of differing attitude towards the role of China and the US in regional affairs, particularly as Australia tries to maintain a balance in its relationship with US, China and India and does not want to be caught in a zero-sum game. India has also been cautious about Australia’s strategic commitment in the region.

On the foreign policy front one of the most complicated issues for Canberra of late has been balancing its strategic partnership with the US and the economic relationship with China. Managing Australia’s ties with the US and China, continues to be a tough foreign policy task for the Morrison government, more so at a time when US and China are in a trade war which is likely to have an impact on regional and global geopolitics in the medium and  long run. The China factor has played out recently in Australian politics in a substantive way. Last year Australian Parliament passed a legislation prohibiting covert foreign interference in domestic politics implicitly targeted at Chinese meddling in Australia’s domestic politics. Australia has been particularly apprehensive about China’s recent push in Australia’s neighbourhood i.e. South Pacific and has been vocal against China’s aid and loan programmes to the Pacific Islands. Recently Australia banned Chinese telecommunications giant Huawei and ZTE from any involvement in Australia’s planned 5G network. Former Prime Minister Malcolm Turnbull, under whose term the government took this decision, explained it on the grounds of ‘national security concerns’ and need to ‘hedge against adverse contingencies in future’.[3] Dynamics of Australia-China relations would have possibly been slightly different if the Labor Party had come to power.[4]

The security relationship between India and Australia will inevitably be spearheaded by maritime cooperation. For both Canberra and New Delhi, their security and prosperity are intrinsically linked to their surrounding waters. For Australia, with its two-ocean geography, 99% of Australian exports are transported by sea, Similarly for India with its long coastlines, 95% of it trade by volume passes via sea route. Therefore, safety and security of crucial sea-lanes remains a priority for both countries. Multiple challenges threaten the maritime security in the region, including inter-state conflicts and changing geopolitical dynamics, now reinforced by energy politics and challenges from an array of non-traditional threats. India and Australia being the two important navies in the region, with their enhanced maritime capabilities can help not only by bilateral cooperation but also by taking along other littorals as a part of multilateral efforts to maintain maritime order. Both the countries played an important role in the reinvigoration of Indian Ocean Rim Association (IORA) in 2013 and together both had brought issues related to maritime security centrally to the IORA’s agenda for the first time by forming a ‘working group on maritime security’. Both countries need to play a crucial role in the future as well for strengthening the regional architecture in a coordinated manner. 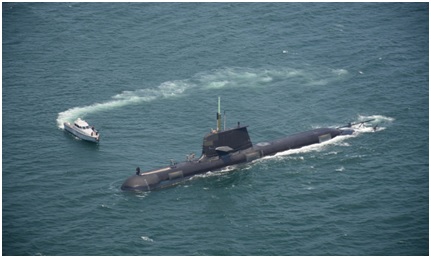 Fruitful interactions have taken place among the navies of the two countries. The third iteration of bilateral exercise between the Royal Australian Navy (RAN) and Indian Navy (IN), AUSINDEX was held from 2-14 April 2019 in Vishakhapatnam, conducting a series of advanced warfare drills including anti-submarine warfare exercises.[5] Over the years the AUSINDEX has become a sophisticated anti-submarine exercise. This year’s exercise had the highest number of units thus far. The Australian Defence Minister Christopher Pyne said at the commencement of the exercise that “India is a significant security partner for Australia, engagement with India through AUSINDEX is the cornerstone of Australia’s Indo-Pacific Endeavor series[1] this year”.[6]

The focus area in bilateral ties has also been the economic aspects of the relationship. Five agreements were signed during the President Kovind’s visit on 22 November 2018 to push education and business links between the two countries. In 2018 the Australian Department of Foreign Affairs and Trade released a report titled An India Economic Strategy to 2035: Navigating from Potential to Delivery. The idea of an independent report was announced by the former Australian Prime Minister Malcolm Turnbull during his visit to India in April 2017, to identify opportunities for Australian businesses in India and consider India’s growth trajectory up to 2035.[7] Referring to the report Prime Minister Morrison had commented that “the report is a blueprint…providing a roadmap for future economic engagement. India’s growing economy offers more opportunity for Australian business over the next 20 years than any other single market”. In fact, he also mentioned about the report in his congratulatory message to Prime Minister Modi, as he wrote “our India Economic Strategy will take our ties to a new level.”[8] India is Australia’s fifth largest trading partner. India’s total trade in goods and services with Australia for 2017-18 was US$18billion, including imports of US$14 billion and exports of US$4billion.[9] India is a lucrative market for Australian natural gas, coal, LNG, and now uranium after the CNCA in place. Efforts are being made to expand the product basket. However, on the downside despiteseveral rounds of negotiations since 2011, the progress on Comprehensive Economic Cooperation Agreement (CECA) has been slow. The focus at this stage therefore, should be on Regional Comprehensive Economic Partnership (RCEP). As per the reports based on the 2nd Special Trade Negotiation Committee (TNC) Meeting held in January 2019 in Jakarta, Indonesia, the negotiations on RCEP have advanced to the final stage.  Therefore, RCEP should be the priority right now, as negotiating positions on CECA are still very far apart. There is immense potential to be tapped in building closer economic partnership between the two countries in the coming years. 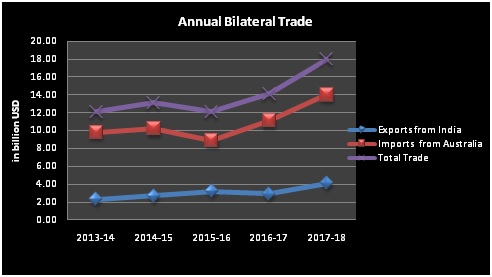 India contributes significantly in terms of immigrants, tourists and students exchange to Australia. Over 60,000 Indian students contribute roughly 45.4% of total international students in Australia.[10] India is also Australia’s ninth largest market for tourists which is expected to grow further. Indian Diaspora constitutes 3% of Australia’s population, which can be leveraged in building strong People to People (P2P) ties. However, as is the case with the US and several European countries, there is a rise of a sense of looking away from immigrant inflows. The Liberal Party has taken a rigid position on the immigration issue. Morrison government unveiled a plan in March 2019 to cut immigration to protect ‘the quality of life’ for Australians.[11] This government therefore is likely to be tough on immigration which could particularly affect skilled migrants from India as well, in the near future. This would be present a challenge for the Indian government. While it will be relatively less challenging for the movement of Indian citizens as tourists, students etc. which is set to increase in coming years and would also significantly benefit Australian economy, emigration issues will be beset with challenges.

In essence, Australia continues to show strong interest in strengthening relations with India not only as a trading partner but also as an emerging strategic partner. With the continuation of the Modi and Morrison governments there is likely to be strong continuity maintained in most of aspects of the bilateral ties. With a push on the economic sphere and broadly shared objectives of stability, openness, and rules based order for the region, it is important that the two countries should start engaging deeply as key strategic and economic partners now.

[4] Australian election: was the Labor Party’s loss a setback for China’s interests?, 21 May 2019, https://www.scmp.com/week-asia/geopolitics/article/3011027/australian-election-was-labor-partys-loss-setback-chinas