Maritime security cooperation is gradually becoming an important aspect of India-France strategic partnership. The current political leadership in both the countries has shown particular keenness in strengthening Indo-French cooperation in enhancing the safety and security of the Indian Ocean Region (IOR). An increasing convergence of interests in the IOR offers a lot of scope for deepening bilateral maritime cooperation.

In recent years there has been significant progress in India-France maritime security cooperation, focusing on the Indian Ocean. India with its growing economic, maritime military capabilities and strategic ambitions in the wider Indo-Pacific region is keen to strengthen partnerships with the countries across the region. France on the other hand, recognizing geopolitical shifts, has begun to stress on its identity as an Indo-Pacific nation and willingness to strengthen its partnerships with the major players in the region. The Indian Ocean has become a priority area of discussion in recent Indo-French bilateral interactions as both countries are eager to expand their long standing strategic partnership to the maritime realm. On August 22, 2019, bilateral talks were held between the French President Emmanuel Macron and the Indian Prime Minister Narendra Modi at Paris, France. Prime Minister Modi was on a state visit to France for the 45th G7 summit meeting at the invitation of the French President. Following the bilateral talks, among others, an MoU was signed for ‘Implementing Arrangement between Indian Space Research Organisation (ISRO) and the National Centre for Space Studies (CNES) France for Joint Maritime Domain Awareness in the Indian Ocean. It follows an earlier MoU between the ISRO and the CNES, signed in March 2018 aimed at co-developing a maritime surveillance satellite system focused on the Indian Ocean. These agreements mark a significant step-forward in India-France cooperation for maritime security in the IOR.

The Indian Ocean has some of the most critical International Sea Lanes (ISLs) carrying much of the trade between Asian countries, Europe, and the Middle East. The Strait of Hormuz and the Strait of Malacca are the world's most important strategic chokepoints by volume of oil transit. Of the total trade passing via the Ocean, nearly 80 percent is carried out by the extra-regional countries. Therefore, safety and security of the Ocean, which is challenged by both traditional and non-traditional threats, is critical not only for the regional countries but also for international economic stability.

Both the countries have crucial stakes in the IOR. India, centrally located in the Indian Ocean and with its extensive coastline of 7500 kms, more than 1380 islands and 2 million sq. km of Exclusive Economic Zone (EEZ), is an important player in the region.1 The geographical location of the country inextricably links its security, commerce and trade with the maritime domain. The Ocean has “shaped much of India’s history, holds the key to India’s future”.2 Much of India’s trade with its major trading partners including ASEAN countries, Japan, Republic of Korea, China and the Americas passes through this region. Nearly 80% of the country’s crude oil requirement which is expected to increase in future is imported using the ISLs across the Indian Ocean.3

France, on the other hand is an Indian Ocean Region state, owing to its overseas territories of Mayotte and La Réunion Islands and a large EEZ. 4,100 French personnel are stationed in the Indian Ocean at different locations including deployments at both the overseas territories, Djibouti and Abu Dhabi.4 Therefore, given the significant interests, both India and France have shared interests in maintaining security and stability in the IOR. 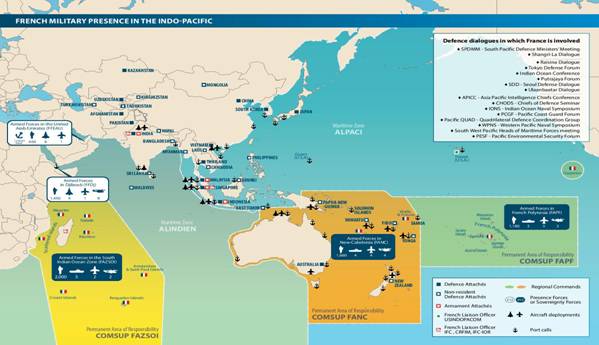 Source: France and the Security of Indo-Pacific, Ministry of the Armed France, 2019

India and France have been strategic partners since 1998. Defence, space and civil nuclear cooperation have been the traditional focus areas of the bilateral relations. Maritime cooperation is gradually becoming a crucial aspect of Indo-French relations as both the countries are looking to explore ways of deepening maritime security cooperation. An important step forward was institution of a Bilateral Maritime Dialogue between India and France in 2015. The last Dialogue was held in 2017 in New Delhi. A White Shipping Agreement between the two countries was signed on the occasion. The agreement will enable monitoring of vessels across the region, exchange of information on maritime traffic enhancing maritime domain awareness.5

Indian Ocean has been a crucial area of discussion during the recent high level visits, including the reciprocal Prime Ministerial visits, Indian Navy Chief’s visit to Paris in 2017 followed by French Defnce Minister’s visit to Delhi and reciprocal foreign ministers visit in 2018. During the French President’s state visit to New Delhi in March 2018, the two countries agreed on a Joint Strategic Vision of India-France Cooperation in the Indian Ocean Region. The vision document highlighted that the two democracies have shared concerns with regard to the emerging challenges in the IOR including: security of maritime traffic in the face of the threats of terrorism and piracy, especially in the Horn of Africa; respect of international law by all states, organised crimes like trafficking and illegal fishing (IUUs); climate change, protection of the environment and natural resources”.6 Both sides reiterated their commitment to enhance cooperation in the IOR and also expressed willingness to partner with other like-minded countries in the format of trilateral dialogues.

Both the countries had also agreed on Provision of Reciprocal Logistics Support Agreement, which seeks to “extend logistical support on reciprocal access to respective facilities for the Indian and French armed forces”.7 It will allow closer defence cooperation in dealing with common challenges in the Indian Ocean. The agreement was operationalised recently, as part of which French Navy’s anti-aircraft destroyer FNS Cassard docked at the Mumbai in January this year.

Fruitful interactions have taken place among the navies of the two countries, bilateral naval exercise is held annually in the Indian Ocean and in the Mediterranean alternatively. The first bilateral naval exercise between the two countries was held in 1983, and it was named ‘Varuna’ in 2001. The 17th edition of India-France Bilateral Exercise ‘Varuna’ was held in May 2019, in Goa. It was the largest ever exercise undertaken between the two navies, with eleven of India and France's most modern units, including two aircrafts and two submarines.8 In addition, ships from both navies make regular port calls at each other’s ports. 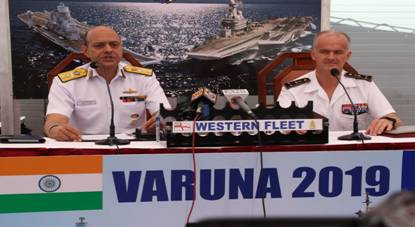 India and France also intend to augment coordination in regional multilateral platforms. India supports an enhanced role for France in Indian Ocean Rim Association (IORA) (France is a Dialogue partner). France also supports India's entry in the Indian Ocean Commission (IOC)i as an Observer.9 France is a part of the Indian Ocean Naval Symposium (IONS), an initiative of the Indian Navy with 24 members participating. France will be presiding over the IONS from 2020-22. The Joint Statement issued during the visit of Prime Minsiter Modi’s visit to France in August 2019 also highlighted that both the countries are willing to coordinate their actions in IORA along with other interested states, to undertake a joint project for combating piracy and all kinds of maritime trafficking in the Southern Indian Ocean. In addition, blue economy and coastal resilience are areas of a common interest. Indian and France are also exploring ways for potential collaboration in marine science research for a better understanding of oceans, including the Indian Ocean.10 Both countries therefore, can play an important role in need in strengthening the regional architecture in a coordinated manner to deal with common challenges in the region.

Partnership in the Context of the Indo-Pacific

The France and Security in the Indo-Pacific published in May 2019 by the French Ministry of Armed Forces, emphasizes that France has almost 9 million km² of EEZ, 1.6 million French citizens live in French overseas departments and territories. France has stationed overseas armed forces and permanent military basing to fulfill the security responsibilities of a resident power of the Indo-Pacific.12

In the context of the Indo-Pacific, there are complementarities in India’s and France’s vision for the region. India’s vision for the region was eloquently put forward by the Prime Minister at the Shangri-La Dialogue 2018 which stands for a free, open, inclusive region with ASEAN centrality integral to it. India’s vision emphasizes that contests must not turn into conflict.13 The French Strategy on the Indo-Pacific 2019 puts forward a holistic vision for an inclusive, stable, law-based, multipolar order in the region and it also emphasizes that “attempts and temptations at hegemony division or confrontation must be discouraged”.14 It stresses that, “security of the Indo-Pacific is a strategic challenge” and priority for the country as balances in the region concern France ‘directly and tangibly’.15 French strategy is also based on strengthening and increasing strategic and global partnerships with partners like India, Australia, Indonesia, Japan, Singapore and South Korea. France though is apprehensive about the assertive attitude of China in the region but it does not want to antagonize or alienate China and emphasizes that relationship with China is “an essential partnership which requires greater reciprocity.16 Speaking at the Garden Island, Sydney on May 2, 2018, French President in fact suggested “a new Paris-Delhi-Canberra axis as a key for the region with joint objectives in the Indian-Pacific region.”17 The complementarity in their vision and strategy provides a substantial base for enhancing their maritime cooperation across the region.

Given the current backdrop of China’s BRI, US-China trade friction and the US-Iran standoff the security balance in the IOR looks uncertain. Power rivalry, increasing military expenditures and naval capabilities, challenges to the multilateral order and international laws particularly the United Nations Conference on the Law of the Seas (UNCLOS), issues of climate change, piracy, and terrorism threatens the stability and security in the IOR.

India’s maritime strategy has undergone significant changes in the post-Cold War period. India has made it clear willingness to partner like-minded countries in the region. India has been expanding its naval capabilities and security relationships all across the IOR. The long strategic partnership between India and France has clearly built a sense of comfort between the two. The multifaceted relationship between two democracies has been on an upward trajectory in recent years in areas of defence, space, and economic and developmental cooperation. As India endeavors to strengthen economic relations and development in the IOR, in a mutually supportive and cooperative manner under the vision of SAGAR (Security And Growth for All), France could be a crucial partner for India. Major focus areas would be maritime domain awareness, combating piracy and counter-terrorism, HADR/SAR, mutual logistics support and increased interoperability. Initially, focused could be more on the western and the southern side of the Indian Ocean where France has active presence. Since France is actively present in both the Indian and the Pacific Ocean, gradually, it can be an important partner for India not just in the Indian Ocean but also in the Pacific, in the wider context of the Indo-Pacific.

i The Indian Ocean Commission (IOC) is an intergovernmental organization that joins African Islands in the Indian Ocean including Comoros, Madagascar, Mauritius, France/Réunion, and the Seychelles together. IOC was formed in 1984 under the General Victoria Agreement with Madagascar, Mauritius and Seychelles as the members Comoros and France/Reunion Islands joined in 1986. IOC aims to strengthen regional cooperation while defending the common interests of these countries.

4 France and Security in the Indo-Pacific’, Ministry of Armed Forces, France, 2019

8 Varuna is largest Indo-French naval exercise to date, May 06, 2019, https://economictimes.indiatimes.com/news/defence/varuna-is-largest-indo-french-naval-exercise-to-date/articleshow/69197138.cms?from=mdr

14 French   Strategy  In The Indo-Pacific “For An Inclusive Indo-Pacific”, 2019 https://www.diplomatie.gouv.fr/en/country-files/asia-and-oceania/the-indo-pacific-region-a-priority-for-france/