Health Emergency: The COVID-19 Pandemic and Latin America & the Caribbean

Abstract
The Coronavirus disease (COVID-19) is in the early stages of its spread in the Latin America and the Caribbean region. The nations of the region have responded in varying degrees to the pandemic. While Venezuela announced a national quarantine, Mexico advocated social distancing. Most nations of the region have responded with restrictions on the movement of people, social gathering and nearly a total ban on international travel. As the region responds to the healthcare challenges presented by the pandemic, the governments would have to also build plans to address the economic impact of the pandemic for the region.

The Latin America and the Caribbean (LAC) region’s governments have responded quickly to the spread of the coronavirus. The region is still in the early stages of the proliferation of virus, allowing the governments to take action that will determine its impact. While the number of people infected or dead due to the virus is not yet comparable to the numbers in Asia and Europe, the governments of the region are taking preventive measures to ‘flatten the curve’. They have an advantage in that, that they can learn from the mistakes made in responses by other nations and chart a more productive response. Most nations have taken proactive steps and imposed strict restrictions on the movement of people, while reducing or shutting down international travel by closing airspace and land borders. A quick response would allow the healthcare system of the countries to respond better and more effectively, while minimising the number of infected cases.

The Pandemic and Responses from the LAC Nations

The first case of COVID-19 virus in the LAC region was reported from Sao Paulo, Brazil on 26 February. According to World Health Organisation (WHO), Brazil has reported 2201 people infected (as on 25 March 2020). To prevent the spread of the virus, Brazil has closed its land borders and is prohibiting entry to people from European and many Asia Pacific countries. Only Brazilian citizens and those who have compelling reasons to enter will be allowed to enter the country.[1] President JairBolsonaro has come under criticism for not maintaining the mandatory self-quarantine and meeting people even after seventeen members of his team who visited the United States tested positive for the coronavirus.[2]

President Bolsonaro at a Press Conference on Covid-19 in Brasilia 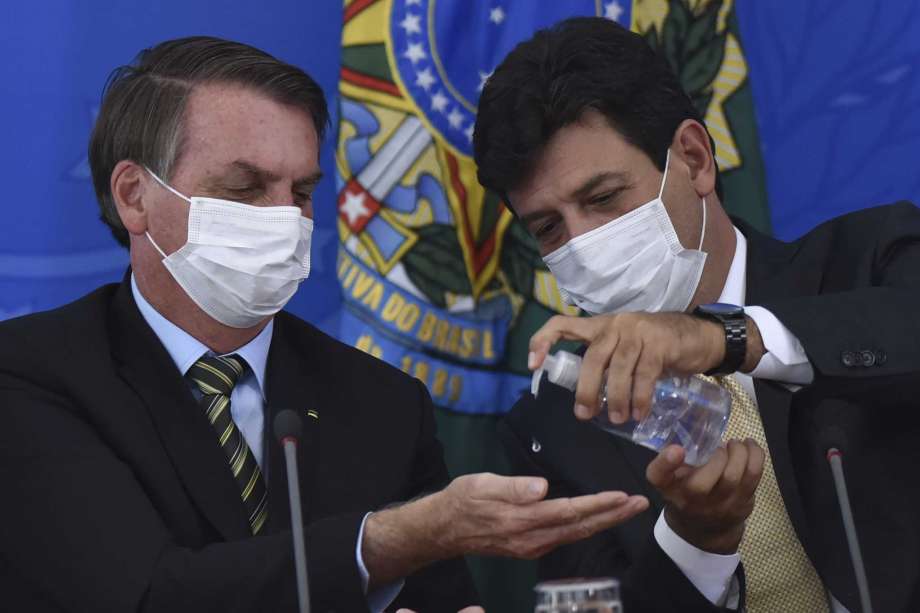 Among other nations of the LAC region, Peru reported three deaths with 318 confirmed cases. “The country has also announced measures to help the poorest in the crisis, a one-off subsidy of 380 soles (US $106) to buy food and medicine.”[3] Mexico has reported 370 confirmed cases. President Andrés Manuel LópezObrador has drawn criticism for encouraging people to gather in large numbers and not practising social distancing.[4] His government has not yet taken decisive steps to combat the spread of the virus despite high number of confirmed cases. Argentina (301 cases) and Ecuador (1049 cases) have announced a "preventative and compulsory" lockdown[5], limiting the movement of people in their cities. Ecuador has further announced a ban on international flights into the country to prevent the virus from spreading further.[6] Colombia (306 cases) and Panama (345 cases) have similarly suspended all international air travel. Colombia has also closed its land and sea borders. President Ivan Duque has stated that the measures were necessary as some people had tried to avoid the mandatory isolation/quarantine regulations. Colombia is also experimenting with restrictions on citizens’ movements for a limited period, as a trial for possible future long term restrictions. Some of its major cities have also imposed night-time curfews. Chile, which has been witnessing street protests demanding amendments to the constitution, has postponed a referendum to change its constitution while announcing an economic stimulus package. It has reported 922 cases and imposed lockdown in Easter Island. In Venezuela, President Nicolas Maduro announced that the country would be under quarantine for an indefinite period as the number of cases rose from 16 to 33 in a single day on 17 March 2020.[7] It has 77 confirmed cases. The measure has been deemed drastic but as Venezuela is already facing an economic crisis, it is assumed that its healthcare system would be under tremendous strain if there is a large-scale outbreak of cases. This may also prove detrimental for the whole region due to large scale migration from Venezuela to other countries such as Colombia and Brazil. Nearly 5 million Venezuelans are spread across the region, many moving on foot through its porous land borders.

Panama, with 345 confirmed cases, had started to screen cargo ships as early as January 2020 as Chinese ships are primary users of the Panama Canal. It has also announced measures such as restricted movement of people to halt the spread of the virus. El Salvador (five cases) has closed its land border and has banned foreign travellers. In addition to national measures, the Central American countries of Belize (one case), Costa Rica (177 cases), Guatemala (21 cases), Haiti (seven cases), Honduras (30 cases), Nicaragua (two cases), Panama, and the Dominican Republic  agreed on March 11 to create a regional plan to combat the pandemic.

While most nations have banned international flights, they need to take stringent measures at their land borders. Most experts who study the region point that the unregulatedflow of people on foot would need to be checked to stop the spread of the virus into countries with weaker healthcare systems.

In the Caribbean, confirmed cases have been reported from nearly all nations. The Dominican Republic has 316 cases, whereas Cuba has reported 48 cases and banned all international travel. Trinidad and Tobago has reported 57 cases. Most island nations of the region continue to have relatively fewer cases but as has been witnessed across the world, the increase is dramatic and quick. The nations of the region have taken varied steps to combat the spread of the virus. Some nations such as Jamaica (21 cases) and Antigua and Barbuda (three cases) are refusing entry to cruise ships and charted flights from countries that have reported COVID-19 cases or have reported to be carrying sick passengers. Cruise ships have proven to be highly contagious and provide the largest traffic to the island nations. They have been barred from entry into ports by nearly all countries of the Caribbean region. Most countries have also banned large gatherings and social events. Bahamas (four cases) has imposed a curfew whereas Barbados (18 cases) has not announced any travel restrictions for the moment, but has made it mandatory for visitors to self-quarantine for 14 days, non-compliance is an offence.[8] The CARICOM heads of governments and health ministers have also established a regional protocol to address the pandemic on March 03 2020. It established defined roles and responsibilities of all entities in effective communication between CARICOM governments and the cruise line industry.[9] CARICOM has also initiated process to develop a framework document to agri-food responses and mitigation.[10] 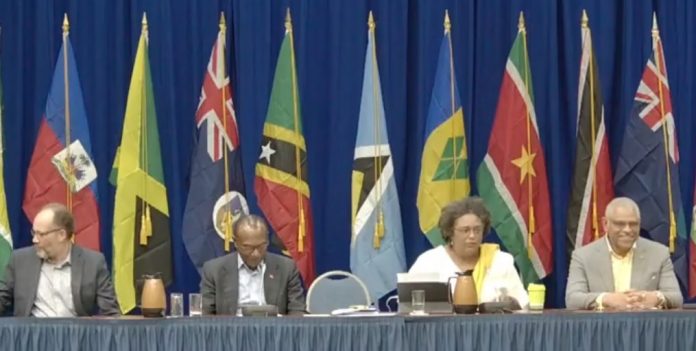 The Economic Impact of COVID-19 on LAC region

The LAC region has been facing political and economic unrest for the past few years. The recent elections in the region witnessed people voting for candidates who pledged to bring about economic stability and equality, improve the law and order situation and fight corruption. Yet as the past year has shown, there continues to be simmering anger against the political leadership for not being able to address the growing economic inequality in the region. The global economic slowdown and drop in the oil prices, along with poor national economic planning, has adversely impacted the economics of the region or the past few years. Most nations of the region are now facing not just a healthcare challenge but also economic vulnerabilities. It is feared that the COVID-19 outbreak that has already disrupted supply chains, led to contraction in the tourism sector and tightening of global financial conditions, will further act as a potential source of macroeconomic instability and financial vulnerability for the LAC region. The International Monetary Fund (IMF) had predicted that the LAC region would grow at 1 percent in 2020, however, according to the United Nations Trade and Development Agency “…the pandemic is likely to cost the global economy at least US $ 1 trillion.  Global economy growth is likely to be less than 2 percent with the fall in oil prices further contributing to an environmental of unease and panic.”[11] The likely effect is that it would further plunge the LAC nations currencies and markets, adding strain to the economy.  In the LAC region, “service sector activity is likely be the hardest hit, as a result of containment efforts and social distancing, with sectors such as tourism and hospitality, and transportation particularly affected. Moreover, countries with weak public health infrastructures and limited fiscal space to ramp up public health services and support, the affected sectors and households would come under significant pressure.”[12]

The Caribbean nations who are mostly dependent on tourism had been trying to recover from earthquake and tornadoes that have devastated them in the past few years; but the spread of the coronavirus has reduced their chances of economic recovery. With other nations stopping international travel and the island nations of the Caribbean taking similar steps, the losses are likely to be magnified in the coming weeks.

COVID-19 is a major test of the healthcare systems of not just LAC region but of the nations across the world. The pandemic has affected close to 196 nations, territories and areas globally and continues to spread. Nations across the world are looking at each other to understand, learn and implement the steps that would most effectively stop the spread of the virus.

“Latin America is the most unequal region in the world, with more than a third of its population living in poverty. For instance, in Mexico, there are less than 1.4 hospital beds per 1,000 people. It is the lowest among nations in the Organisation for Economic Cooperation and Development. In Venezuela, doctors and hospitals often do not even have running water to wash up. Doctors across the region warn that once the virus starts spreading freely in poorer communities, it could spark a humanitarian crisis.”[13]

Venezuela and Cuba have hailed the United Nations call for easing of sanctions in the face of the crisis. Despite sanctions Cuba is leading the way in the region and has adopted a humanitarian approach to the crisis. Cuba has one of the most effective and well established health care systems in the region and has sent a team of doctors to Italy at the request of the latter. “According to media reports, Cuba-developed medicine for the treatment of COVID-19 is being tested after it was sent to experts in China, Italy, Brazil, Venezuela, and others countries. One of the most promising medicines is Interferon Alfa 2B and Cuba is already working on a vaccine.”[14] Yet Cuba continues to deal with U.S. sanctions that have hampered the procurement of medicines. While the LAC nations have individually taken steps to contain the virus from spreading, however, apart from the Central American nations there is no regional response. A regional response, similar to the SAARC efforts in South Asia, could be explored. It would allow the nations of the LAC region to collaborate and pool resources to counter this global health threat together. The region is in early stages of the outbreak and needs to take decisive steps to stop it.

*Dr. Stuti Banerjee, Research Fellow Indian Council of World Affairs.
Disclaimer: The views expressed are that of the Researcher and not of the Council.