The Emerging Realignment in Southeast Asia

The concluded 33rd ASEAN Summit and the various other related meetings held in November 2018 draws an image of the emerging shifts in the region. This is being witnessed at a time when the normative structure on which ASEAN is built is being challenged on account of the Association’s internal constrains in addressing issues such as the Rohingya humanitarian crisis, the divisions on the South China Sea dispute, and the larger issue on the persisting socio-economic divide, in the region. ASEAN is also facing external pressures as a consequence of Southeast Asia once again pivoting towards becoming the centre of the great power rivalry as it was during the Cold War period. Further, the emerging global uncertainties from rising trade protectionism in the West, security issues arising from the use of disruptive technologies, climate change, terrorism, and the growing frictions in the marine space, adds to the region’s growing concerns. These new developments have prompted the Association as well as the countries in the region to enhance their traditional relations while also begin building new partnerships for regional stability and preserving ASEAN’s unity and centrality. The paper would highlight some of these recent external engagements being undertaken by the nations in Southeast Asia.

It is important to note that ASEAN was not intended to be a security organisation. However being formed out of the compulsions of the Cold War, members of the Association, sharing a common perception of threats made it a security organisation in a limited sense. This was done by the security and defence partnerships it began to establish through the various ASEAN led mechanisms such as the ASEAN Regional Forum (ARF), the East Asia Summit (EAS), the ASEAN Defence Ministers Meeting (ADMM) and the ADMM Plus. For the last decade some countries in Southeast Asia have exhibited growing apprehension over the political-security and military implications of China’s rapid and successful economic modernisation. The ongoing dispute with China on the South China Sea, which remains far from reaching any kind of a resolution, continues to shape the region’s external relationships. The negotiations of the Code of Conduct on the South China Sea between ASEAN and China, once completed, would have little impact if it is legally non-binding. Beijing has been insisting on discussing the issue of the disputed islands and reefs on the South China Sea bilaterally with the concerned party and not through the ASEAN mechanism. Further, its growing naval activities in the South China Sea, which includes the building of artificial islands for military deployments elevated the ‘China threat’ level in Southeast Asia, in particular the future security of sea-lanes in and around ASEAN.[1]

At the 13th East Asia Summit held on November 14, 2018, for the very first time emphasis was laid on the need for maritime cooperation between ASEAN and the other member nations of the EAS. President Jokowi while addressing the EAS conveyed Indonesia’s vision of the “World Maritime Axis", in which he spoke on the importance of building maritime cooperation in the Pacific and the India Oceans. According to him these two oceans are a Single Geo-Strategic Theatre representing complex challenges, as a consequence of the scrambling for natural resources, regional disputes, and maritime supremacy with control over the world trade routes as the end game.[2] The data projected in the line graph in figure one indicates the military expenditure of the ten ASEAN countries. On account of security challenges posed from non-state actors’ post 9/11 and the increasing tension in the South China Sea, there has been an increase in the overall military expenditure in the region. For instance, the data indicates increasing military expenditure for Indonesia, which is faced with extremist violence. Vietnam’s growing concern over its dispute in the South China Sea has also led to its increasing military expenditure. 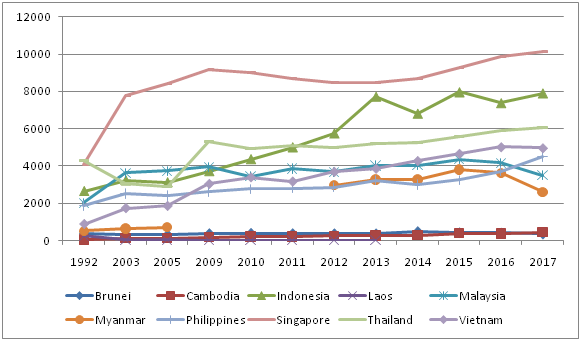 Nations of Southeast Asia are in the process of deepening the scope of their bilateral ties with extra regional powers with which there already exist a line of engagement. The visit of Chinese President Xi Jingping to the Philippines from 20-21 November, 2018, was historic given that both nations decided to establish comprehensive strategic cooperation in contrast to the poor atmosphere that had plagued their relations only a few years ago. The Joint statement after President Xi’s meeting with President Duterte chartered the course for the future of China-Philippine bilateral relations based on mutual respect, sincerity, equality, mutual benefit and win-win cooperation.[4] This visit saw the conclusion of 29 agreements which also included joint oil and gas exploration. The push for further collaboration between Philippines and China indicates both have desire to put aside, for the time being, their differences over the contested South China Sea and focus on raising mutual trust and confidence. The two are also keen on increasing bilateral trade and investments, with China being asked to get involved in Duterte’s signature US $ 180 billion “Build, Build, Build”, infrastructure programme. Stephen Nagy, a Senior Associate Professor at the International Christian University, Tokyo, argues that this move by China is a means towards further increasing its leverage on the region while undermining Manila’s traditional allies such as the US.[5] Chinese President Xi’s visit to Bandar Seri Begawan – the first by a Chinese leader in 13 years – where it was agreed to link China’s ‘Belt and Road Initiative’ with Brunei’s Vision 2035 developmental blueprints, indicates the new policy approach being adopted by both sides.[6]

The re-alignment being witnessed is also on account of new partnership being established with nations with which there were limited engagements in the past. Countries in Southeast Asia are stepping up their military capabilities by establishing new defence cooperation structures. Russia is today engaging more with the region, becoming one of its major arms sellers. According to SIPRI, in Southeast Asia, Russian defence companies sold US$6.64 billion worth of armaments between 2010 and 2017, outpacing their American counterparts’ US$4.58 billion in sales over the same period. President Vladimir Putin attending this year’s EAS, the first for a Russian leader, signalled Moscow’s growing engagement in the region. During this visit President Putin met with Singapore’s PM Lee, and both reiterated their commitment towards concluding the Eurasian Economic Union or EAEU-Singapore Free Trade Agreement (FTA) currently under negotiation. Malaysian PM Mahathir also signalled his keenness to enhance defence and trade ties with Russia during his meeting with President Putin at the sidelines of the EAS. Russia has also concluded a defence agreement with Indonesia for the sale of eleven Sukhoi SU-35 fighter jets worth US$1.14 billion last year. Vietnam is Russia’s largest arms importer in the region accounting for 78% of Russia’s total arms exports to the region during 2010-17.[7] On November 14, at the sidelines of the 3rd ASEAN-Russia Summit a Memorandum of Understanding (MOU) between ASEAN and the Eurasian Economic Commission (EEC) on Economic Cooperation was signed. The signing of the MOU would assist in closer economic interaction between ASEAN and the EAEU by contributing to expansion in trade and investment.[8] Vietnam is the only ASEAN member-state to have signed an FTA with the EAEU which came into force in 2016.[9]

As brought out in the paper the region of Southeast Asia is witnessing realignment in its external engagement. This is as a result of the changing international environment which has led to countries in Southeast Asia to expand into new partnerships while also deepening traditional relationships. These new realignments are a necessity in order to ensure that the region remains shielded from the various security challenges. The ongoing tension on the South China Sea between China and some of the ASEAN States further adds to the region’s sensitive security environment. Further, Beijing’s increasing presence within the region along with ASEAN’s own limitations in addressing some of the key internal issues, raises concern on the future of the Association’s unity and centrality. As ASEAN is the most important framework in the region it needs to ensure the maintenance of its unity and centrality; a thought that continuously finds place in the joint declarations of the Association. For instance, ASEAN is integral to the Indo-Pacific construct in which the centrality of ASEAN would be crucial in order to enable the establishment of a regional security order which is inclusive, fair and protects the sovereign rights of all the nations. Under the Chairmanship of Singapore in 2018 much emphasis was placed on leading the region to overcome challenges posed by the changing external environment while continuing the region’s march towards progress, by incorporating new technologies and continuously innovating. Thus, ASEAN’s 2018 theme of ‘Resilience and Innovative’ becomes significant in preserving this unique ASEAN identity which seeks to ease tension while promoting regional stability and growth.

[8]“ASEAN and the Eurasian Economic Commission sign a Memorandum of Understanding on Economic Cooperation”, ASEAN, November 14, 2018, https://asean.org/storage/2018/11/MOU-between-ASEAN-and-the-EEC_Signed-English.pdf, accessed on November 28, 2018.