The broad consensus reached on various issues during the informal summit between Prime Minister Narendra Modi and President Xi Jinping in Wuhan (April 27-28, 2018) indicated a ‘forward looking approach’ in India-China relations. It was an extremely important meeting in the backdrop of Doklam standoff in 2017, which lasted for 73 days. Subsequently, meetings between the two leaders at Qingdao (June 2018), Johannesburg (July 2018), Buenos Aires (November 2018) and Bishkek (June 2019) not only strengthened bilateral relations between the two Asian powers but also highlighted the importance of building a qualitatively new relationship. These bilateral meetings were underpinned by the spirit of Wuhan Summit. In this background, this paper aims to analyse some emerging trends in India-China relations.

However, the strategic communication has not given desired results on some emerging issues.

As planned earlier, India’s External Affairs Minister (EAM) Dr. S. Jaishankar visited Beijing on August 11-13, 2019 to co-chair second meeting of High Level Mechanism (HLM) on Cultural and People-to-People Exchanges. In his interaction with Chinese Foreign Minister, issues pertaining to recent legislation on Jammu and Kashmir (J&K) passed by the Parliament of India was raised by China. The EAM conveyed that “this was an internal matter for India. The issue related to changes in a temporary provision of the Constitution of India and was the sole prerogative of the country.”i The legislative measures are aimed at promoting better governance and development. He assured that “there was no implication for either the external boundaries of India or the Line of Actual Control (LAC) with China. India was not raising any additional territorial claims. The Chinese concerns in this regard were therefore misplaced.”ii

During visit of Pakistan’s Foreign Minister to China on August 9, 2019, China’s Foreign Ministry stated that “It (J&K) should be properly and peacefully resolved based on the UN Charter, relevant UN Security Council (UNSC) resolutions and bilateral agreement.”iii This statement is a clear departure from the Chinese position on J&K, which earlier considered the issue a bilateral matter between India and Pakistan.1 It is evident that China’s new position has not been accepted by international community and it was isolated at the UNSC on the matter of J&K. The Chinese move at UNSC on J&K is an infringement to India’s core interests as well as against the sprit the Wuhan Summit.

The massive protests in Hong Kong Special Administrative Region (HKSAR) or the situation in Xinjiang Uygur Autonomous Region (XUAR) has not invited India’s reaction on it as India considers it China’s internal matter. However, seeing China’s changing position on J&K, the mainstream debate in India suggests that reciprocity might be an appropriate policy under the emerging situation. 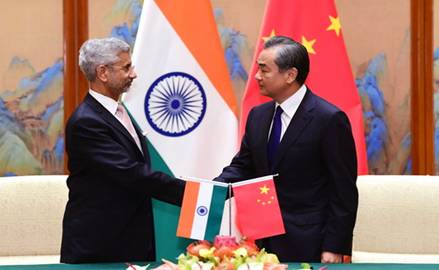 During the Wuhan Summit, both sides decided to “strengthen the Closer Development Partnership in a mutually beneficial and sustainable manner”.iv There are some positive outcomes especially in the field of agricultural commodities.

The above table illustrates that four protocols related to Basmati Rice and Non-Basmati Rice, Fish meal/ Fish oil, Tobacco Leaves, and Chilli Meal have been signed since the Wuhan Summit. This is certainly a welcome development. However, the issue of market access for Indian products in the areas of drugs and pharmaceuticals, IT and IT related services needs to be resolved to ensure a balanced and sustainable economic partnership. After all, India’s trade deficit with China was above US$ 50 billion in 2018-19 and this is an issue that requires forward movement.

The establishment of the HLM on Cultural and People-to-People Exchanges was an important outcome of the Wuhan Summit. The first meeting of the HLM was co-chaired by the then EAM Sushma Swaraj and Wang Yi, Foreign Minister of China on December 21, 2018 in New Delhi. The HLM reflected the desire of the two countries to broad-base the relationship through enhanced exchanges in areas such as culture, art, tourism, media, films, sports and academic, including think-tanks and youth exchanges.

The second meeting of HLM on Cultural and People-to-People Exchanges was co-chaired by EAM Jaishankar and Wang Yi on August 12, 2019 in Beijing. Both sides signed four MoUs to promote cultural exchanges, to enhance cooperation in the field of traditional medicine; cooperation in museum management; and promotion of exchanges between national sports associations and sports persons. Both sides also discussed some new proposals/ideas and agreed to organise 100 activities to further strengthen cultural and people-to-people ties.[vi] These are welcome developments and may increase people’s support for stronger India-China relations.

In the context of economic relations and people-to-people contact, there seems some forward movement in India-China bilateral relations. However, recent political and strategic issues have not ruled out negative fallouts in contrast to the positivity in the Wuhan spirit. Public opinion in India has called for responding to Chinese changing position on J&K.[vii] It is hoped that China will rethink its position on J&K, and take initiatives, to control the damage done so far in the new era of bilateral relations after Wuhan. It is appropriate to quote Prime Minister Modi’s statement during Shangri La Dialogue in June 2018. He had said, “Asia and the world will have a better future when India and China work together in trust and confidence, sensitive to each others’ interests.” The future of India-China relations will depend on mutual respect for these principles.

1 China started to show a kind of neutrality on bilateral issues between India and Pakistan such as J&K since 1990s. President Jiang Zemin’s speech at a special session of the Pakistani Senate on 2 December 1996 was quite explicit in this regard.