Prime Minister Narendra Modi and President Donald Trump met on the sidelines of the G71 summit in Biarritz in France on 26 August 2019. This was their second meeting of the year2. Though India is not a member of the G7 Prime Minister Modi attended the summit as a special guest of French President Emmanuel Macron. India and France have common concerns on issues such as the Iran nuclear agreement and climate change. 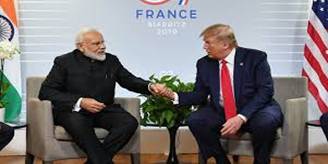 Prime Minister Modi and President Trump at the G7summit

This meeting between Prime Minister Modi and President Trump can be viewed as an effort by the two nations to ease the recent strain that is visible as a result of trade and economic issues and some tweets by President Trump on India-Pakistan relations. Trade is an important part of the bilateral strategic partnership, but differences over market access and tariffs have escalated in recent months, leading to fears of a protracted dispute. President Trump has stated that New Delhi is taking advantage of the ‘developing nation’ tag given by World Trade Organisation (WTO) and continues to impose high tariffs on products from the United States. To counter this perceived bias, the Trump administration has imposed tariffs on steel imports from India and ended preferential access for Indian products. In retaliation in June 2019, India imposed retaliatory tariffs on 28 products imported from the United State.

After the meeting, Prime Minister Modi stated that India had plans to further increase its imports from the United States as they try to overcome their differences on tariffs and market access. It was also agreed that, before Prime Minister Modi’s visit to the United States in September to attend the UN General Assembly, there would be interactions between the trade ministers of both sides. Energy sector has specially been identified for more cooperation. During his visit to the United States later in the year, Prime Minister Modi is scheduled to travel to Houston in Texas to address the Indian community and meet with business leaders in the energy sector. The objective there is twofold, one to see how India can import more energy (oil) from the United States and second, on how it can invest in the energy sector in the United States.3 It has been announced by the White House that President Trump would be participate in the above event. The Press statement highlighted that, “It will be a great opportunity to emphasize the strong ties between the people of the United States and India, to reaffirm the strategic partnership between the world’s oldest and largest democracies, and to discuss ways to deepen their energy and trade relationship.”4

The meeting at the G7 summit was also the first between the two leaders after the revocation of the special status of the state of Jammu and Kashmir, by the Government of India. President Trump had made an offer to mediate between India and Pakistan, after Pakistan claimed the situation in the region had become critical. In response, India has categorically clarified that the decision was an internal matter and one that has to be accepted by Pakistan. Reaffirming that issues related to Jammu and Kashmir can be discussed bilaterally with Pakistan. Prime Minister Modi categorically rejected the need for a third party mediation. After the meeting, President Trump remarked that the India has the situation under control and stated, “India speaks with Pakistan ...I think they can do it themselves very well. They’ve been doing it for a long time.”5

The meeting between the two heads of governments comes as India and the United States held a bilateral 2+2 inter-sessional meeting in California in August 2019.The two sides reviewed the progress and development of bilateral relations in areas of defence, security, and foreign policy since the inaugural 2+2 Ministerial meeting of September 2018. It further explored possibilities of cooperation in these fields. They also discussed regional developments, and agreed to pursue their quest for a free, open, inclusive, peaceful and a prosperous Indo-Pacific.6 This was followed by the fourth round of India-U.S. Maritime Security Dialogue in California in August 2019. During the dialogue, both sides discussed issues of regional maritime security and exchanged views on ways to further strengthen bilateral maritime security cooperation.7 This is aligned with the view to deepen defence and security cooperation between the two nations. The defence partnership is a key pillar of the India-US relationship and India has over the past few years diversified and purchased more defence equipment from the United States.

The depth of the Indo-U.S. strategic relationship provides the two nations the space to candidly express differences and overcome challenges while finding common solutions. The relationship is fuelled by geostrategic realities and political convergences. As both sides commit to the strategic partnership, policymakers will need to chart a course to achieve concrete goals by the next decade. This can be achieved by operationalising the concept of the Indo-Pacific, building a roadmap for credible peace in Afghanistan, allowing for the transfer of key technologies across sectors, expanding trade and commerce and taking advantage of emerging opportunities in agriculture, healthcare, digital trade, etc. The meeting between the two leaders indicates their commitment to strengthen the bilateral relations and continue to work together through contentious issues.

1The countries that are part of the G7 are the United Kingdom, Canada, France, Germany, Italy, Japan, and the United States.

3PTI, “India to import more from US, commerce ministers to talk to reduce bilateral trade differences,” https://economictimes.indiatimes.com/news/economy/foreign-trade/india-to-import-more-from-us-commerce-ministers-to-talk-to-reduce-bilateral-trade-differences/articleshow/70846129.cms, accessed on 27 August 2019.