Remaking of Omar al-Bashir in Sudan: New Hotspot of Counterrevolution

At present Sudan seems to be heading towards a similar situation in which countries like Libya, Yemen and Syria in the region are trapped. Given the ideological and political divide and tensions among regional powers like Saudi Arabia, Turkey and UAE and their visible involvement in the country, the situation is likely to destabilize further.

Perhaps one could have never imagined that Sudan will so early slide into political abyss after a twenty-year old girl, Alaa Saleh1 emerged as a symbol of protest in her white robe waving the national flag and leading chorus of ‘Exit Bashir’. This captured the global media attention and trended for a week on social media. But enthusiasm dwindled soon after as the deep state2 struck back, similar to what happened to the post-Arab uprising politics in the region.

The military oligarchs in Sudan with the collaboration of deep-state elements seem to have sabotaged the birth of a new politics at its nascent stage. The trajectory of the end of three-decade old rule of Omar Al-Bashir in April 2019 was almost a replica of what had been witnessed in the early days of the Arab uprising when many were forced to abdicate their power due to people’s protest and disenchantment with the politics of status quo on the streets. The three-decade rule of al-Bashir was similar to his predecessor President Nimairi who reigned his opponents through policy of divide and rule. Like al-Bashir, President  Nimairi  too  was  removed after weeks of protest against food price hike and growing dissatisfaction with the ruler . The role of armed forces was very decisive in the removal of Nimairi and the end of al-Bashir’s rule also came to an end when his army abandoned him after the realization that his survival had become impossible.

It all began in December 2018, when people took to the streets of Khartoum to protest the removal of bread subsidies3 and the price rise of common commodities. Gradually the movement gripped the whole nation and soon morphed into a full-fledged public march to oust President Omar Al-Bashir, who has become a liability and a seen as the perpetrator of economic and political hardships. April 6 2019, became a heyday in the politics of Sudan as the people blocked the road and demanded Omar’s exit. It was again the army, like other countries of the Arab world which proved to be a catalyst and did not come in the way of the protestors, which was perhaps reflective of how the army oligarchy of one country learns from the other’s examples. It becomes more obvious when one see the role of army in post-Arab uprising politics where they have played different but decisive roles.

On April 11, Omar Al-Bashir was removed from power due to mounting pressure on the streets His failure to win the support or sympathy of the armed forces meant an almost similar replay to what had happened to President Mubarak of Egypt in 2011 when he was too abandoned by his army  after they realized that his survival had become impossible because of the mounting pressure.

The armed forces formed a seven-member Transitional Military Council (TMC) to govern the country and the protestors formed their own group, ‘Alliance of Freedom and Change (AFC)’ and Sudanese Professional Association, which wanted an immediate handover of power to a civilian entity.

Several rounds of talks followed, but no progress was made over the issue of representation in the executive and the sovereign council.4 The TMC refused to share the executive power with the civilians while the opposition forces wanted both the majority in the council and the executive power as well. The issue of “who will rule Sudan” is likely to determine the political trajectory of Sudan and one does not know if it will go the Egypt’s route or follow the political model of Tunisia. 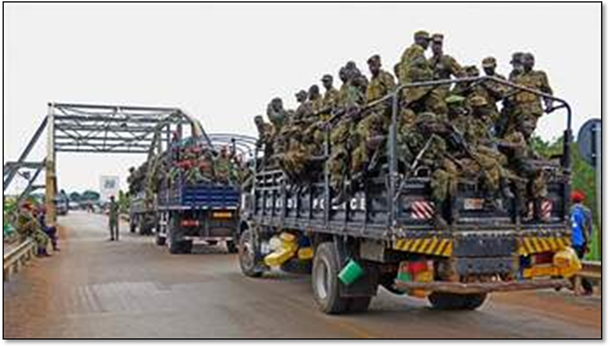 What really changed the whole gambit of Sundanese politics and dwindled the prospect of reconciliation was the violent crackdown by the army against the protestors on June 3, 2019 during a sit-in front of army headquarters in Khartoum. There are contradictory reports about the death toll and some reports mention the killing of three hundred protestors.5 There are reports of women being raped with several bodies taken out of the Nile River. The opposition demanded a UN-led inquiry into the incident6 and suspended thereafter all negotiations with the army . The protestors also demanded the removal of the army from the urban areas and in particular, an immediate disbanding of a government-created militia, Janjaweed7 which was allegedly behind the June 3 killings. On his part, the head of the TMC, Lt. Gen. Abdel Fattah Abdelrahman Burhan, in a televised address announced the formation of a caretaker government, with an election within nine months8 instead of three years. It remains to be seen if this is a more than a tactical move to reinstate the old guard in the country’s new political process.

One of the most unfortunate parts of the crisis in the Arab world has been that no country has been able to escape external intervention and Sudan seems to have suffered same fate. The incident of June 3 happened after Mr. Burhan visited Saudi Arabia to attend the Arab-Islamic Summit in Mecca and declared his support to the “Deal of the Century” and the war in Yemen9. Burhan’s participation at the Summit was without any political or constitutional legitimacy at home. Further the decision of Mr. Burhan to take off his uniform appeared to indicate his desire to rule the country with a civil appearance and military sprit.

Mohamed Hamdan Dagolo, also known as Hemeti and deputy of Burhan also flew to Saudi Arabia and in a meeting with the Crown Prince Mohamed Bin Salman announced a decision to send Sudanese troops to help the Saudi-led coalition in Yemen. It is interesting to note that Saudi Arabia had a good relationship with al-Bashir too and continues to maintain a similar relationship with the new regime. The recent announcement of aid of US $ 3 billion10 to the new regime of Sudan by the UAE and Saudi Arabia is indicative of the fact that these countries are fully supportive of the new regime. Mr. Burhan later visited the UAE and Egypt, which too like Saudi Arabia had a good bond with al-Bashir, and these three countries seemed to have no love for any democratic upsurge at home or abroad in the region. What is interesting to note that many of the factors that are shaping the current Arab politics are at play in Sudan as well. For example, Turkey, which in recent years have supported the Islamists across the region , is supporting the similar forces in Sudan as well while Saudi Arabia, Egypt and UAE are extending all  supports to the army and do not want any sort of ascendency for the Islamists elements which are trying to carve out a space for themselves amid political unrest. There are reports that current regime due to immense pressure from Egypt is planning to scrap the deal signed with Turkey during the tenure of al-Bashir.11 Turkey too like Saudi Arabia had good ties with al-Bashir and President Erdogan’s visit in 2017 was epitomized as a historic one when both the leaders had signed a number of strategic and economic agreements.

The African Union (AU) Peace and Security Council suspended the participation of Sudan in African Union (AU) activities and called the TMC to hand over the power to a civilian government within three months but the action has failed to bring any changes and presently all negotiations between the TMC and civilian groups led by the AFC have been suspended by the TMC12. As far as the role of big powers are concerned, China and Russia opposed the US move at the UN to impose sanctions against Sudan, which seems to be continuation of their recent policies against the US when one recalls how many of the  US  moves  against  President  Assad of Syria and on Libya were either vetoed or opposed by these two. Ethiopian Prime Minister Abey Ahmad flew to Sudan13 amid the deadlock to persuade both sides to move towards reconciliation but without any desirable outcome. Mr. Abey is someone who enjoys the trust of the opposition, widely known for his diplomatic skills, particularly after he brokered peace with his neighboring country, Eretria recently.

Given the present political scenario in the country, one may apprehend a new danger of Sudan being trapped into a new vortex of regional intervention which might not allow the country to pursue its own independent political path.

At present Sudan seems to be heading towards a situation in which most of the countries in the region are already trapped given the ideological and political divide between regional powers like Saudi Arabia, Turkey and UAE and their explicit interference in the domestic affairs of regional countries. What is required at present is to establish a confidence building measures between the protestors led by the AFC and the army because there is complete lack of trust between the both sides. Both the TMC and the negotiators should respect and understand the limitations and aspirations of each other. What is further required, given the complexities of the situation, is the adoption of a gradualist and inclusive approach where both sides could learn from what has happened in case of  Yemen and Libya due to lack of an inclusive approach  and absence of a roadmap which derailed the political process.

1 She was dubbed as a Kandaka in local and global media which was the title of Nubian Queen. She is a part of Sudanese folklore as a woman who has sacrificed a lot for Sudan

2 Deep state involves those elements which have developed an interest in politics of  status quo and always back  backed the existing  state system. They are primarily political elites, bureaucrats, entrepreneurs, media houses   and military oligarchs whose power and privilege are directly linked to the state.

4 Under an agreement between the TMC and AFC on May 15, an executive council legislative body and an honorary sovereign council was created.

7 They are an unregulated armed militia created by previous regime initially to suppress the rebel forces during the Darfur conflict of 2003 and after the end of Darfur crisis; state of Sudan did not disband them and kept it alive to be used from time to time to harass the political opponents. Under Omar, they were almost integrated in the national army of Sudan and named Special Security Forces and acted like an own army of the President and today they are working under direct control of  deputy of Abdel Fattah , Mr. Dagolo