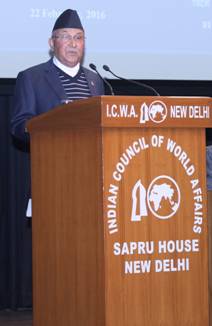 In the question and answer session, four questions were taken up and responded to by the Nepalese Prime Minister. The first question was asked by Mr. Ashok Mehta, a retired General from the Indian Army. He began by saying that Mr. Oli’s main mission in visiting India was to clear the misunderstandings of the past, recent past and congratulated Mr. Oli on his success of removing the misunderstandings. His question was that though misunderstandings have been removed at the level of governments, but misunderstandings between people, since the India-Nepal relationship is between two sovereign people, what measures does Mr. Oli’s government in cooperation with the Government of India intend to take in removing the anti-India sentiments that have been created in Nepal?

The second question was by Dr. Sanjeev Dudeja. His question was on Madhesis’ participation – that despite their participation, there are grievances. How would Mr. Oli address these grievances; would he take it from scratch or will it be taken care of in this Constitution itself?

The third question was by Dr. Pramod Jaiswal, IPCS. He said that Mr. Oli has formed political mechanisms. Does Mr. Oli think that it will work because he has formed it unilaterally?

The fourth question was by Dr. Thakur, a journalist. She asked about Nepal’s bilateralism, whether India will see any change in Nepal’s policies vis-a-vis India and China?

Mr. Oli, on the first question, answered that as Mr. Mehta said, the cloud of misunderstanding has been cleared now. The cloud between the governments may be clear, but between the people or among the people; what is the situation? Mr. Oli said, “Really speaking, there was no problem between the people. We are, in fact, talking about the relations between the two governments, mainly. Among the people, ‘jaise bolte hain ki beti roti ka sambandh border ilake mein (hai), there is no problem. There is no problem near the border area and they are getting married. Within three months, (there is a question of citizenship) 596 ladies, who went to Nepal after wedding, got citizenship. Within four months, 1075 ladies got naturalized citizenship. The marriage, the relationship between people of this and that side are always normal. In fact, there were, to some extent, some misunderstandings, but they were just misunderstandings. Misunderstanding is the lacking of real understanding. Now the situation is clear.” 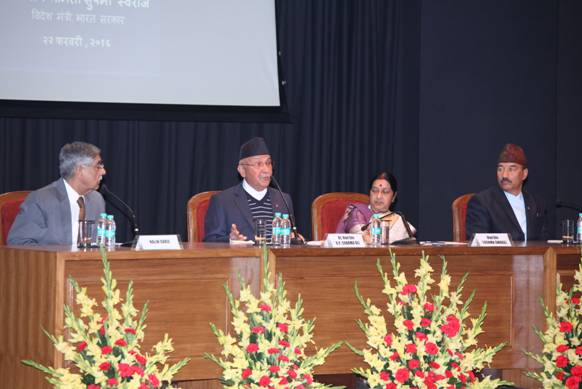 “As far as the question of unilateral declaration of the political committee to decide about the boundaries of the provinces (is concerned), it reflects that we want to resolve the problem. We want to listen to the demands and grievances of the people and want to address those problems. Even now, we are talking, talks are going on. Dialogues are taking place, of course, continuously. Even in the crucial times always, we were taking and trying our level best to resolve the problems. For that, we amended the Constitution for the first time after the promulgation. In a very short period of time after the promulgation of the Constitution, we amended (it), which was not so easy. It was not easy to amend a Constitution, which was just promulgated. When it started to be implemented, at that time, we amended the Constitution, to address the voices, the problems, the grievances and demands of the people, nothing else. Similarly, regarding if there are any questions, we are ready to listen and address them. One thing, Constitution is a changing document. According to the needs of time and demands of the people, it can be changed and amended. The question of numbers and borders, etc. of the provinces also is a common question. Some two years before, a number of provinces in India were added. From Andhra Pradesh, Telangana was carved out and Telangana, a new state and province emerged. The numbers were changed and the border was changed. Even after such a long time since the promulgation of the Indian Constitution, the process of (changing) these boundaries and numbers, etc. is still continuing. So we are ready and this is not that we can, (or) we have to write or draft the Constitution or promulgate the Constitution or declare the Constitution for always. There shouldn’t be any mistake. Yes, there is no mistake for the present needs and for the present feelings or present demands, we can address but if the demands and experiences say something different and demands call on the future, then the Constitution is amended. Similarly, the provinces are for the benefit of the people, for their service; how they can develop further, the provinces etc. This Committee is formed, the Political Committee, we were just waiting and discussing to form (it) with consensus. We were trying to reach an agreement, but finally we failed to do that. So, under the leadership of the Deputy Prime Minister and Foreign Minister Mr. Kamal Thapa, one coordinator and there will be 11 members. Ten members are left there. Therefore, there is no reason why there is dissatisfaction because there is enough space for discussion. We have just declared the number of the Committees and the chairperson or the coordinator or the leader of the committee to lead the committee, that’s all. And this committee, the Political Committee’s (agenda) will be fulfilled with consultation and agreement with the other sides also. Because this is not just to keep (it) in a showcase, but this is for resolving the problems, which have appeared, so we want to do that.”