India shares approximately 4100 km land border with Bangladesh, the border being with the Indian states of West Bengal, Assam, Meghalaya and Tripura. This makes Bangladesh the longest land border sharing neighbour of India.[ii] In such a scenario, a stronger connectivity link between India and Bangladesh becomes extremely pertinent. Therefore, this bridge has been rightly dubbed as the ‘Gateway of North East’ by both governments.[iii]

In a broadcast in 2015, PM Modi had expressed the need and importance of a bridge connecting Bangladesh and NE India.[iv] Bangladeshi PM Hasina, too, in her bridge inauguration speech on 9th March 2021 focused on the importance of the bridge in regards to connecting Bangladesh with the economies of NE India. PM Hasina had informed that the suggestion for such a bridge had been mulled upon since 2010 when the Former CM of Tripura, Manik Sarkar had suggested a bridge over the river Feni with an aim to facilitate connectivity from the Chittagong Sea Port.[v] Constructed by the National Highways and Infrastructure Development Corporation Ltd. at a project cost of ₹133 Crores, the 1.9 km long bridge joins Sabroom in Tripura, NE India with Ramgarh in Bangladesh.[vi] Ramgarh is located just a mere 80km from the Chittagong Seaport. 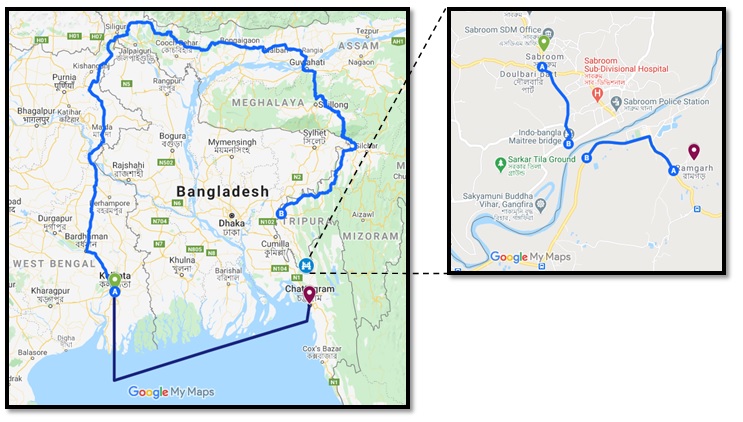 The NE region of India is connected to the rest of India through a very narrow land strip called the Siliguri Corridor, informally referred to as the ‘Chicken’s Neck’. It is an extremely narrow stretch of land (approximately 22 km wide) in North West Bengal, neighbouring Nepal, Bhutan and Bangladesh. The Corridor is a strategic vulnerability for India due to its proximity to China through Sikkim and Bhutan. Any infringement upon this narrow stretch of land would restrict any direct land access for the rest of the country with the NE region. In such a possibility, alternative land and sea routes for direct access to the NE region through Bangladesh would not only prove to be of vital strategic advantage but also a necessity. A cordial transit relation between India and Bangladesh thus has immense significance. This, thereby, adds value to the ‘Maitri Setu’ as an alternative link between the rest of India and NE India through Bangladesh.

India is the “biggest trade partner of Bangladesh in South Asia”.[vii] Bangladesh is also an integral part of India’s Act East Policy. The overall trade between India and Bangladesh has seen an increase from US $6.7 billion in 2015-16 to US $9.4 billion in 2019-20.[viii] Thus, it is of great interest for India to develop stronger economic relations with Bangladesh. This is also reflected by the Commerce Secretary level exchanges between the two countries just a day prior to the inauguration of the Maitri Setu. Both the governments also agreed to “expeditiously move forward on the feasibility study on the Comprehensive Economic Partnership Agreement (CEPA)”.[ix] This is indicative of the potential rise in economic ties between the two countries.

Being a landlocked region, the NE economy had faced tremendous hurdle when it comes to supply and trade. The presence of a single freight corridor through the Siliguri Corridor makes it vulnerable to any sudden disruption. The Maitri Setu provides a direct access for Tripura to the seaport of Chittagong through Ramgarh promises an enhanced trade link between the Rest of India with NE and NE and Bangladesh.

The Maitri Setu also plays a central role in the execution of the MoU allowing India to transport goods from West Bengal to NE India through the Chittagong and Mongla Ports (Bangladesh).[x] This new maritime route of Kolkata to Chittagong will provide the quickest way for the movement of goods. The route will also provide an alternative to the Sittwe Port-Kaladan route that aims to connect the ports of West Bengal with Mizoram, NE India through a combination of sea and land route through Myanmar.

The inauguration of the Maitri Setu can hence be seen as a symbolic marker for the enhancement of stronger bilateral relations with one of the most important neighbours of India. Being a part of the BIMSTEC and BBIN, an all-weathered nature of Indo-Bangladesh relations would prove to be not only beneficial for India but also other neighbours like Nepal, Bhutan and the ASEAN nations.